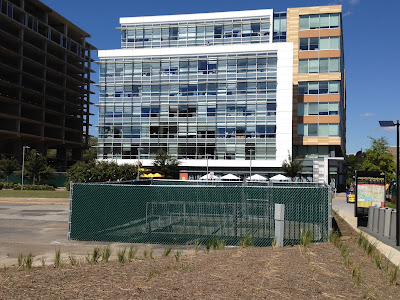 On Monday, the Zoning Commission deferred action on the request by the city and Waterfront Associates to extend the PUD on two parcels at Waterfront Station - the District-owned northeast parcel and 425 M Street (southwest parcel) owned by the development team.  The main reason for the deferment until the October 29 Zoning Commission meeting was due to the resolution by ANC 6D earlier this month opposing the extension. The District has yet to respond to concerns from the ANC about a plan for what they want to do with their parcel and creating a paved walkway in the interim to replace the muddy path made by people traversing the site.  One of the zoning commissioners wanted to deny the extension outright because they felt the Deputy Mayor's Office for Planning and Economic Development (DMPED) has been dragging its feet on soliciting a RFP for a parcel that will provide affordable housing in a city that desperately needs it. The city's contention that they want to get the maximum value for the land and the need for affordable housing is counter intuitive, according to the Commissioner. Part of the reason for the delay in doing anything with the site is because the parcel was once owned by the Anacostia Waterfront Corporation (AWC), a quasi government agency that was dissolved by the Fenty administration and the parcels controlled by AWC (including the northeast parcel) were transferred to DMPED.  Since the ANC voted earlier this month, Waterfront Associates has addressed some of their concerns with the development team's parcel, including the construction of a fence to cover an exposed staircase on the M Street parcel (see above) and has updated the contact information on signage posted on the vacant retail space on 4th Street.

The ANC will have a chance to reconsider their disapproval of the extension at their October 15 meeting once they get some answers from DMPED.
Posted by SWill at 8:49 AM

The ZC hears and decides requests for special multi-purpose projects referred to as Planned Unit Developments (PUDs). A PUD is a planning tool which allows a developer greater flexibility in site planning and building design. This flexibility permits the developer to incorporate amenities in the project that exceed those that could have been achieved under the general provisions of the Zoning Regulations. When a project is designated as a PUD, the ZC usually mandates the development of standards specifically tailored to the project.