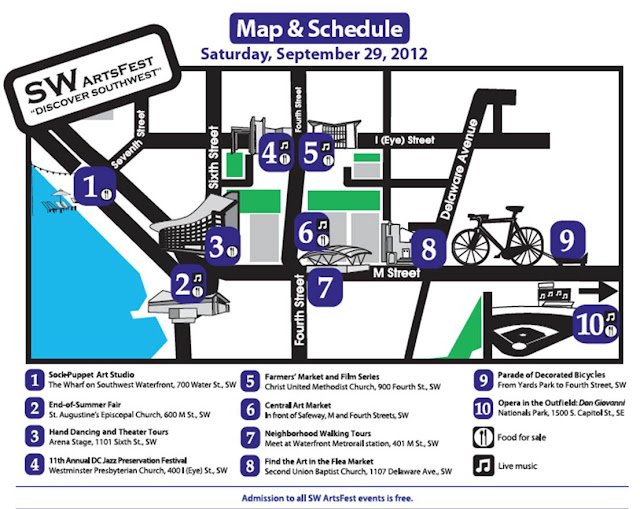 On Saturday, September 29, the second annual SW ArtsFest will join the ranks of other Ward 6 festivals that take place in September, including those on H Street, NE and Barracks Row. This year, there will be 10 events occurring in SW and just over South Capitol Street at Nationals Park and Yards Park. Take a look at the above map for the locations of each event. Over at the SW waterfront, there will be a sock puppet art studio at 7th Street Landing from 11am - 5pm.  St. Augustine's Episcopal Church will host their annual End-of-Summer Fair with music, crafts, face painting, moon bounce, fried fish sandwiches, a bake sale, and a raffle from 9am - 4pm. Across the street at Arena Stage, there will be hand dancing performances and hourly theater tours from noon to 6pm. Westminster Presbyterian Church will have its 11th annual DC Jazz Preservation Festival with music, crafts, and food for sale from noon - 8pm. Across 4th Street from Westminster will be a farmers market and film series at Christ United Methodist Church. The farmers market lasts from 9am - 2pm and the film series from 2pm - 7pm. At the Waterfront Metro plaza in front of Safeway, there will be a Central Art Market with arts, crafts, food, and live entertainment from 10am - 6pm. Also in the vicinity of the Metro station will be two neighborhood walking tours by Washington Walks (Renewing Urban Renewal at 11am and Southwest Waterfront: From Watermen to Wreckers to "The Wharf" at 2pm). Each tour will last 90 minutes. Further down M Street at Second Union Baptist Church there will be a flea market from 10am - 3pm. From 1pm - 2pm, there will be a parade of Decorated Bicycles that will make its way from FIGMENT at Yards Park in Near SE west along M Street to 4th Street. Finally at Nationals Park, Don Giovanni will be performing in Opera in the Outfield - pre-opera entertainment will start at 5pm and the opera will be from 7pm - 10:30pm.  Admission to all events is free!
Posted by SWill at 9:00 AM