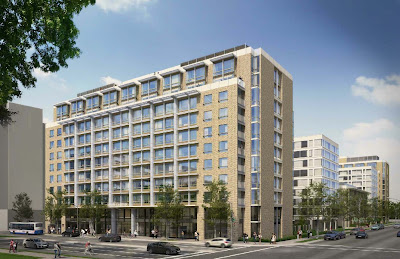 A new 3-building infill residential development just to the east of Sky House I at Town Center was revealed in this week's Washington Business Journal (subscribers only). The Bernstein Companies is moving forward with plans to build on their parking lots that currently serve Waterfront Tower condos and 1001 @ Waterfront apartments. According to the Zoning application that was submitted last month, there will be two new 11-story buildings flanking M Street and K Street and a 4-story building between the two existing towers on 3rd Street. In addition, 1001 @ Waterfront will be renovated.  Maurice Walters Architect, PC has designed the new buildings. The article states that 1001 @ Waterfront will remain as apartments after the renovation. Once completed, the proposed development at Town Center will yield 401 new multifamily units with a mix of studio, 1BR, and 2BR units, 128 renovated apartment units, 289 below-grade parking spaces, and 2,940 SF of retail on M Street and K Street. In addition, 20% of the housing will be set aside as affordable (5% to households making 50% or less than AMI, 5% to households earning 60% or less than AMI, 5% to households making 70% or less than AMI, and 5% to households earning 80% or less than AMI). Below is a breakdown of what will be built/renovated (note that the buildings shaded in green are what will be built/renovated): 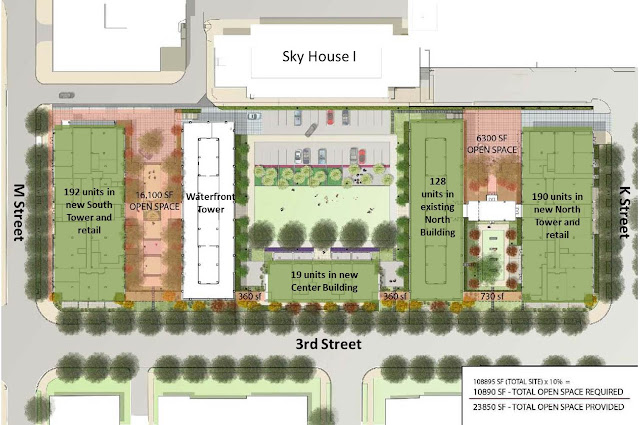 Here is part of the description of the new buildings from the PUD application:

The new North and South Towers will include a two-story high base that will be enclosed but will feature large expanses of glazing that relate to the open ground floor of the Pei Towers. The main massing of the new towers will rise to a height of 90 feet (9 stories), which is approximately the same height as the Pei Towers. The remaining two stories of  the building will taper with setbacks and terraces to a height of 110 feet (11 stories).

The new North and South Towers will replace existing surface parking lots, creating a more pedestrian friendly experience on both M and K Streets. The new four-story Center Building will replace an existing brick wall along 3rd Street, adding new stoops and entry doors to 3rd Street. These doors and entries from 3rd Street, along with large expanses of fenestration above on the building, will help to activate 3rd Street.

All of the parking and loading will be accessed from an alley to the west of the site off of K Street and a circular drive on M Street that's being created in conjunction with Waterfront Station, with only one curb cut on K Street.  The other curb cuts that currently exist on the site (including M Street) will be removed. Town Center will aim for LEED-Silver and will have environmental enhancements such as green roofs, underground cisterns for collecting storm water runoff, and energy efficient lighting.  Some of the public benefits included in the PUD application include:
The WBJ article states that there is no construction timetable yet for the Town Center project and each building will be done separately, not concurrently.  If the consolidated PUD application is approved, it will be valid for two years, but the developers can apply for an extension if building permits have not been secured within the two-year window.

Renderings courtesy of Maurice Walters Architect, PC
Posted by SWill at 8:55 AM

That 2,940 SF of retail on M Street and K Street must be a typo. That's enough for maybe two shops?

Enough for 3 shops actually. Two in the South Tower - the corner of 3rd & M and on the SW corner, and a third on the NW corner of the North Tower.

I'm not certain why the restoration of a building the developers owns and will rent space in is considered a "community benefit?"

Since 1001@Waterfront is a s***hole, they should be spending money on a complete overhaul. But I don't trust Bernstein to make this about anything other than their bottom line, their management thus far makes that clear.

4 large building cramped in one block? hmmm. I hope this is not a trend

In addition to planting trees they need to make an irrevocable commitment to water, prune, maintain, and replace them if necessary.

The blocks between 3rd and Delaware need to be addressed - there is high demand for residential space and redevelopment in southwest, with numerous construction projects underway, with very cluttered and crowded results as we see with this Town Center proposal, concerns about viewsheds and skylines elsewhere, yet here in the midst of all of this is a naive throwback of low density between 3rd and Delaware. The new proposals are including affordable housing, so it would make sense to continue that trend and rethink blocks such as the one between 3rd and Delaware.

In line with Gunter's comment above, are there currently any plans on the books for Greenleaf Gardens?

Another comment: Beauty is in the eye of the beholder, but I think that proposed design for the 19 unit center building is ugly. It appears to be an attempt at harmonizing the new N/S towers with the Pei towers yet comes off as looking immediately drab and aged. IMHO, I believe that the designs of the Pei towers, N/S towers, and SkyHouse already give a sufficient nod to the evolution of the area ---- The center building should be designed to present a tasteful but artistic complement and contrast to the buildings surrounding it. The small size of this building compared to it's neighbors ensures it would remain subtle without dominating the character of the block. Perhaps more glass or some curves... As an example, Bing Thom's design of the Arena Stage worked in this respect, but it is too extreme for a practical residential design. Just my two cents.