Well that was fast.  Only a couple of months after finalizing the Southwest Ecodistrict Draft Plan, the General Services Administration issued a "Notice of Intent" to issue a Request for Information over the next 90 days for five properties the agency controls in the area, including its Regional Office Building at 7th & D Street.  The other properties include the Department of Energy's Forrestal Complex, the Cotton Annex, and two buildings occupied by the FAA.  The properties roughly create a triangle shape, bounded by Independence Avenue to the north, 12th Street to the west, and Maryland Avenue, parts of 9th Street, D Street, and 7th Street to the south.  In fact, the parcels are referred to as Federal Triangle South in the Notice of Intent. The RFI seeks to do the following: 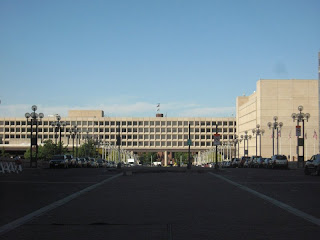 This move by the GSA can potentially lead to the transformation of a large area adjacent to the National Mall into a lively, mixed-use environment.  However, with a name like Federal Triangle South, that doesn't exactly give off a "mixed use" vibe, given the way the original Federal Triangle looks right now.  Personally, I prefer the "Independence Quarter" moniker used in the SW Ecodistrict Draft Plan for the area.
Posted by SWill at 11:56 PM