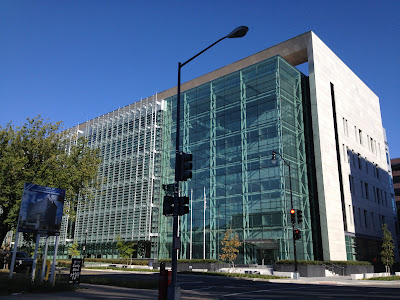 After several years in the making, the Consolidated Forensic Laboratory will have a ribbon-cutting ceremony on Monday at noon. The LEED-Gold building, located at 4th & E Street contains green elements such as a solar shade louver system, a green roof, and chilled beams. The CFL will be home to MPD's Crime Lab, the Office of the Chief Medical Examiner, and the DC Public Health Lab. A total of 300 - 350 employees will be housed at the facility. The Washington Post reported last week that the new crime lab division will be run by civilians instead of MPD officers.

The site was formally MPD's First District headquarters before it moved to Bowen Elementary School on M Street and the building was demolished in early 2010.
Posted by SWill at 11:07 PM