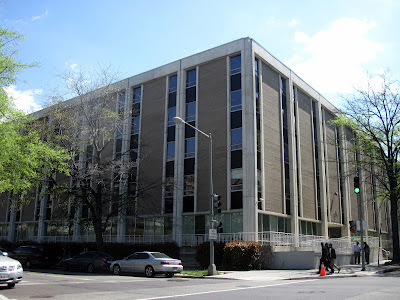 The Washington Business Journal reports that the Donohoe Building (400 6th Street) has been purchased by Trammell Crow and the AFL-CIO Building Investment for $41.9 million.  Back in March, a loan the previous owners had on the building was in danger of going into default. The 5-story building will be razed by the new owners after the District's Child and Family Services Agency vacates the building at the end of their lease in October. In its place will be a 12-story "state of the art" office building. There's no indication whether there will be ground-floor retail in this building. Construction is supposed to begin next June with completion scheduled for mid-2015.  It wasn't clear from the article whether the project will be built without a lead tenant, but that usually isn't the case with office buildings these days, so that construction start date may slip if a tenant isn't found soon.  There are a couple other office buildings planned in the vicinity - one located a block south of this site at the current site of Engine 13 and the other at 4th & E Street.  Both of these sites are planned by E Street Development, which won the rights to these sites by DMPED a few years ago. Construction was supposed to begin on the 4th Street building last year, but has been delayed. In addition, Constitution Center is across the street from this site and is still trying to fill the rest of the space that was let go by the SEC when they decided not to move into the building.
Posted by SWill at 10:39 PM

This is another example of why the ANC would not approve Waterside Partners' request to delay development of Fourth Street, S.W. Clearly, there is a market for office space within six blocks north and east of Waterfront Station, there surely is one at Fourth & M Streets, S.W., (directly atop a Metro Station, no less) for developers with confidence in the community.