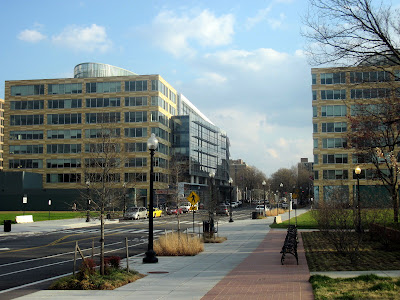 At last Monday's ANC 6D meeting, representatives from Waterfront Associates came before the commissioners to request their support for a 2-year extension of their PUD for two parcels at Waterfront Station - the District-owned NE parcel next to CVS and the West M Street parcel in front of Station 4 and Z-Burger. On the NE parcel, which will one day be a multifamily building with ground floor retail, the District is not ready to issue a RFP because they say that land values are still depressed in the area and they would not get a sufficient amount of income from the sale/lease of the land to a residential developer at this time. On the West M Street parcel, which is planned as an office building with ground floor retail, the development team does not want to construct an office building without a tenant because the commercial real estate market has not rebounded yet and GSA (a major source of tenants in Southwest) has halted new requests for office space.  They continue to pursue any solicitations for office space that come on the market, but they aren't optimistic that they can land an anchor tenant before the current PUD expires early next year.

Waterfront Associates decided not to ask for an extension on the East M Street office parcel in front of Safeway since the PUD on that site doesn't expire until April 2015. On the NW parcel next to Westminster Church, they will soon submit plans for a 300+ unit rental apartment building with 4,000-5,000 square feet of ground floor retail on 4th Street. They will come back to the ANC within the next couple of months to get approval for that building, but they weren't able to give much details on the project since they are still finalizing the design.

After hearing the presentation, the commissioners voted unanimously to oppose supporting the extension. Some of the reasons for their disapproval include the lack of care that the development team and the District have made with regard to the interim use of the vacant parcels in question. On the NE parcel, there is a muddy pathway made by people who traverse the lot. On the M Street parcel, the trailer that once housed Bank of America was removed last month, but there is a random staircase left over from when Waterside Mall was in existence and the rest of the lot has not been grassed over yet like the others. Another reason for the disapproval was due to the lack of retail (especially a bank) at Waterfront Station. There are four vacant storefronts in the existing office buildings and the phone number posted on the windows of the spaces for potential tenants to inquire about availability was incorrect (that has since been corrected).  The development team no longer owns the retail space (it was sold to USAA along with the two office buildings last year) but they are willing to act as intermediaries between the ANC and the new owners. They mentioned that USAA has some proposals for tenants that they are currently reviewing so there may be some movement on the retail front soon. 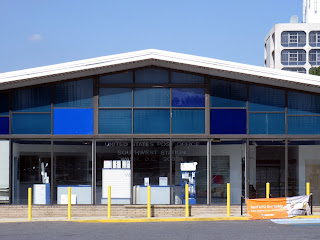 In other ANC news, DC Delegate Eleanor Holmes Norton is working with USPS to negotiate with The Ruben Companies, who owns the SW post office site at L Street to keep the post office open beyond the point when the current lease expires at the end of 2012.  Also, the Gangplank Slipholders Association and the Hoffman-Madison Waterfront team have come to an agreement that will allow the slipholders to stay in the Washington Channel during the transition phase while The Wharf is under construction. In addition, the agreement will preserve the current management practice in place that will allow boats to maintain their value if they are sold to liveaboards.
Posted by SWill at 11:12 PM