- There was an article last week in Sporting News that gave an update on the prospects for DC United’s push for a new stadium.  The new ownership group is starting to have conversations with the city to get them on board with funding infrastructure improvements and assembling land for a soccer stadium. Buzzard Point remains the likely site in the District for the new stadium, although DC United is also in talks with Baltimore officials to possibly relocate to that city. The Buzzard Point site is only a few blocks southwest of Nationals Park and the two facilities would be linked together by Potomac Avenue.

- Vornado is selling two office buildings it owns near the Federal Center SW Metro and one of them – The Washington Design Center at 300 D Street – will most likely be the new home of a bible museum, according to the Washington Business Journal (subscribers only).  From the article:

An affiliate of The Museum of the Bible, a nonprofit organization, has a contract to buy the design center to display its multimillion-dollar collection of sacred texts, artifacts and other items known as the Green Collection, according to sources familiar with the deal…It could take four or five years to open the museum because a large portion of the items to be displayed are now part of a traveling exhibition and will not be available for display immediately. 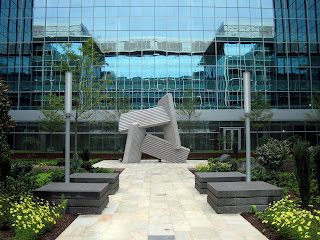 - Constitution Center, the massive 1.4 million SF office building on top of the L’Enfant Plaza Metro that went up for sale last year is close to finding a buyer. According to citybizlist, MetLife is nearing a deal to purchase the building for somewhere in the vicinity of $750 million. 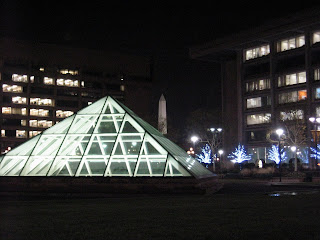 - According to an article in Capital Business, an equity stake in L’Enfant Plaza is up for sale by JBG, the owner of most of the complex. The equity stake for sale is only for the existing office buildings, not the improvements underway and planned. Those improvements include a new Homewood Suites extended-stay hotel planned for the southeast corner of 9th & D Street, an expansion of the existing retail center, as well as an office building planned on the southeast side of the complex. Eventually, another office building is planned for the plaza area. 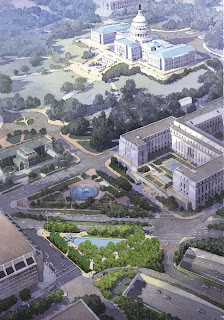 - The proposed American Veterans Disabled for Life Memorial has received over $6 million in grant money from the U.S. Department of Transportation's Public Lands Highway Discretionary Program according to the BeyondDC blog. The 2.4-acre memorial is planned for the triangle formed by Washington Avenue, 2nd Street, and C Street. Back in 2010, the National Capital Planning Commission approved the design of the memorial, but infrastructure funding was still needed. With funding now in place, construction will begin next year with dedication planned in early 2014.

Rendering courtesy of the National Capital Planning Commission
Posted by SWill at 6:37 PM