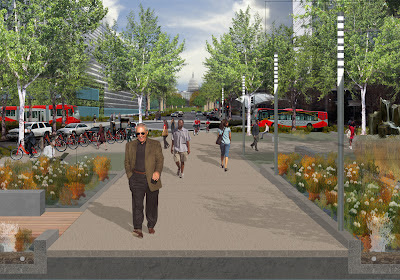 The National Capital Planning Commission released the SW Ecodistrict Draft Plan last week.  The plan proposes to transform a 15-block predominantly federal precinct located just south of the National Mall into a highly sustainable, walkable neighborhood that connects the Mall and the Southwest Waterfront, and becomes a showcase of sustainable urban development and the site for new nationally significant memorials, museums, and events.  The proposed SW Ecodistrict comprises almost 110-acres bounded by Independence Avenue, Maine Avenue, 12th Street, and 4th Street.  I've written about the process on several occasions, so I won't go into much detail here about what the plan contains, but following are some highlights:


The plan suggests to re-create and connect streets throughout the Ecodistrict, including Maryland Avenue, Virginia Avenue, and 9th Street.  New pedestrian connections will also be created throughout.


The draft plan proposes four focus areas that would transform the area:

The public comment period on the draft plan will last until September 10.  If you want to learn more about the draft plan, there will be a public meeting tomorrow from 6:30pm - 8:30pm at 1100 4th Street, second floor.

Renderings courtesy of the National Capital Planning Commission
Posted by SWill at 11:50 PM

We can do better than solar panels over I-395. Check out what Dallas is doing over their Woodall Rodgers Freeway: http://www.theparkdallas.org/

I agree that as long as the highway is below grade, it should be decked over -- preferably as open space. However, east of 7th street, the grade starts increasing and makes a deck impractical or awkward. So in that case, it makes sense to use the space for another purpose.

In general, I really like the idea of solar panels using the air rights above the highway. It's not something I had thought about before. And actually, it would make sense to build the panels farther East toward the Capitol (say, 7th through S. Capitol St.). If there's enough solar capacity it could replace the fuel of the coal-fired hot water plant that's served the Capitol far too long (perhaps this is an opportunity for Fed assistance too?). My only outstanding question, though, is how much of a difference there is in maintenance cost given the unique placement of the panels -- not only in longevity of the panels but in labor/equipment required to access them.