At last night's ANC 6D meeting, the Hoffman-Madison Waterfront team have a presentation on Parcel 11A & B as well as Waterfront Park at The Wharf. Jim Clark from MTFA Architecture spoke first about Parcel 11A, which will be the new St. Augustine's Episcopal Church. Clark explained that there will be views of the church from M Street, Maine Avenue, and M Street Landing since it will be located at the prominent corner of M Street and 6th Street.  There will be a soft curved edge in front of St. Augustine's to complement the curvature of Arena Stage across the street. The 2-story church will be approximately 15,000 square feet with the sanctuary located on the second floor offering views toward the Washington Monument.  Also on the second floor will be classrooms and a library. On the ground floor, the entrance will lead to a vestibule that connects to classrooms and an all purpose room, which will be available for community events, similar to how St. Augustine's is now used for meetings.  A plaza will be located near where Maine Avenue will intersect with a new Water Street that will include among other things a labyrinth. Frttted (or semi-transparent) blue glass will cover part of the church where the vestibule and sanctuary are located. 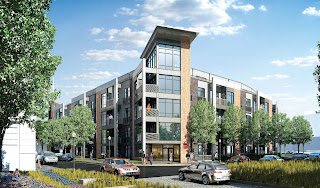 Next up was Federico Soifer from SK&I Architecural Design Group, who discussed plans for Parcel 11B, a 109-unit condo building.  The asymmetry of the facades were designed to be similar to the Tiber Island townhouses across the street  There will be a concrete base with four stories of wood frame construction above. The penthouse level will be set back 12 feet from the lower floors and will offer private terraces. A courtyard will be created on the second floor with some green space and a fountain. In addition, there will be a green roof, but condo residents will not have access to the roof except for those with terraces on the penthouse level. Commissioner Garber and some in the audience at the meeting wanted rooftop access for all residents of the building since it will have views of the waterfront, but the developers decided during the design process not to offer this amenity. 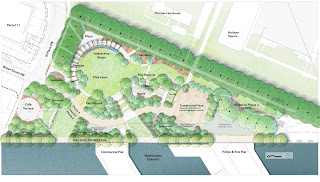 The planned Waterfront Park at the southeastern end of The Wharf was planned through a charrette process with community members (me included).  A few things have changed since the last iteration of the park design after some critique from the U.S. Commission of Fine Arts.  Above is the current design of the park.  Changes include the addition of more connections to neighboring properties, such as Harbor Square.  More interior pathways have been added and the bocce courts have been consolidated to one area of the park.  The access road is less intrusive now that it is curved and the circular turnaround has been changed to a rectangular plaza that could be used for special events.  In addition, more plantings will be used to frame views toward the Washington Channel.

The ANC will hold a special meeting on July 25 at 7pm to reconsider their previous vote to not endorse the Stage II PUD for The Wharf.

Renderings courtesy of Hoffman-Madison Waterfront
Posted by SWill at 11:04 PM