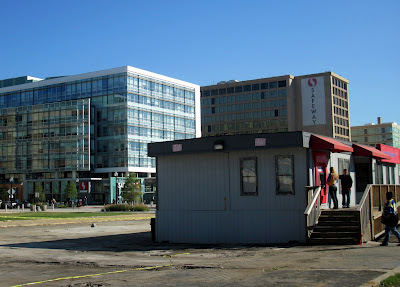 The days are numbered for the trailer at Waterfront Station housing Bank of America - signs have been posted in front of the trailer stating the branch will close on Friday, July 20 at 2pm. The following Monday, the bank will reopen at its new location a few blocks away at 55 M Street, SE.  Some landscaping has already been installed over the past couple of weeks on the lot where the trailer is located with some ornamental grasses and a small lawn area.  Once the trailer is removed, the rest of the lot will be landscaped as well.  This lot, along with the other lot across 4th Street, will someday become office buildings.

As for the rest of the retail at Waterfront Station, there is no news yet of tenants singing leases for those spaces, although the property manager has indicated recently that some national retailers have expressed interest. They are in the process of preparing the spaces for tenant use, since there are issues with the location of the main electrical and mechanical panel from when the buildings were constructed and these  additional costs need to be negotiated with any potential tenants.

On the residential front, both phases of Sky House are now under construction with phase one scheduled for completion by early 2014.  The next residential building planned for Waterfront Station is a rental apartment building on the northwest parcel with 6,000 SF of ground floor retail.  Waterfront Associates will most likely go before ANC 6D sometime this fall with plans for that building.
Posted by SWill at 11:44 PM

where exactly is the northwest parcel you refer to @SWill?

SWag: It's the grassy lot on the northwest portion of the Waterfront Station site, which is on the same side of 4th Street as Westminster Church.

Are there any other 24-hour ATMs in the neighborhood anymore? The only ones I know of are inside the Safeway and CVS. (There's also one inside Fort McNair, but that's not exactly accessible.)