Tiber Island on its Way to Historic Status 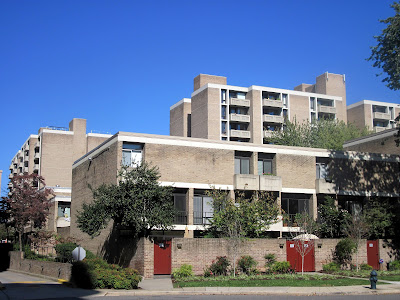 (This post is an abbreviated version of the South by West article that will appear in July's Hill Rag.)

Tiber Island Co-ops and Condominiums is the latest residential complex in Southwest to seek historic designation. The Southwest Neighborhood Assembly (SWNA) submitted an application last fall at the request of the Boards of the Co-Op and Condominium communities to be nominated to the District and National historic registers. Designed by the architecture firm Keyes, Lethbridge & Condon and built between 1963-65, Tiber Island comprises 8.4 acres and is situated south of M Street between 6th Street  and 4th Street, north of N Street. Tiber Island was originally designed as rental apartments and townhomes, but over time became two entities – a co-op containing four high-rise towers and townhomes near the center of the development, with the remaining townhomes primarily along the perimeter under condominium ownership. The four towers form a pinwheel around a central plaza and the townhomes are placed in a manner that creates a series of courtyards and passageways throughout the community. On the west side of the complex is a Great Lawn and adjacent to it is the Thomas Law House, which was built in 1794 and now serves as a community center (it was listed in the National Register of Historic Places in 1973). 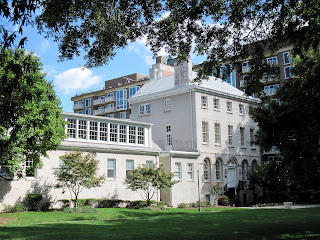 A public hearing was held on May 24 by the Historic Preservation Review Board to consider the Tiber Island application. Ultimately, the Board was unanimous in its support of the application, with some members urging the Historic Preservation Office and community to consider creating a Southwest Historic District. Members thought a piecemeal approach to historic designation was not the best route and that creating a historic district would be a better option. For instance, Potomac Place Tower at 800 4th Street SW was designated by the HPRB as historic in 2003, while Harbour Square Cooperatives has an application pending for historic designation. River Park is about to celebrate its 50th anniversary and other residential buildings in Southwest are approaching the half century mark, which makes it easier to apply for historic designation. Whether there is enough community support to create a historic district in Southwest is uncertain – the Historic Preservation Office staff members do not feel that there is sufficient support yet since there is still some debate whether the wholesale removal of a community in the guise of urban renewal should be commemorated with a historic district.
Posted by SWill at 11:09 PM