Review of "The Music Man" 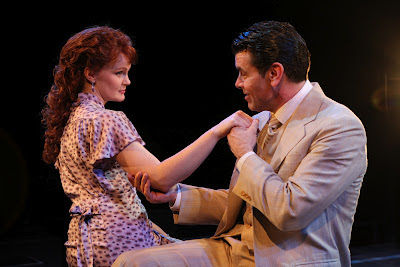 Arena Stage recently held an opening night performance of Meredith Wilson’s The Music Man.  This is the second classic American musical done by Artistic Director Molly Smith since Arena reopened in 2010 – the first was the record-breaking Oklahoma!, which ran in the fall of 2010 and had a second run in the summer of 2011.  The Music Man tells the story of a smooth-talking salesman who cons the residents of a Midwestern town into thinking that he is a music professor and wants to create a boy band, but needs money from the townsfolk to buy instruments and uniforms.  However, his plan is compromised by the local librarian, who ends up winning his heart.  The show stars Burke Moses as traveling salesman (conman) Harold Hill and Tony Award-nominee Kate Baldwin as librarian Marian Paroo.

Baldwin’s voice is amazing…and she kept herself pretty busy with all the wardrobe changes she had to make throughout the performance!  Speaking of wardrobe, some liberties were taken by Artistic Director Molly Smith – one being the time period of the show. The Music Man as originally written was supposed to take place in the early part of the 20th century, but in the program, the Time and Place is described as “River City, Iowa.  Set in a vision of America’s past, with echoes of today.”  The attire worn by the cast in the first act places this production in the 1930s or 1940s, but as the show progresses, the wardrobe becomes more contemporary in nature. 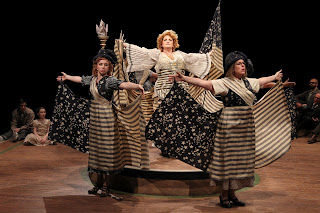 There were solid performances all around, from the school board member Quartet and the child actors to the choreography of numbers such as “Marian the Librarian” and “Shipoopi”.  Overall, I enjoyed the show, but compared to Oklahoma!, I’d say Oklahoma! was more entertaining.  The Music Man runs at Arena Stage until July 22. Tickets can be found here.

Photos by Joan Marcus, courtesy of Arena Stage
Posted by SWill at 10:02 PM