ANC Votes to Not Endorse Wharf 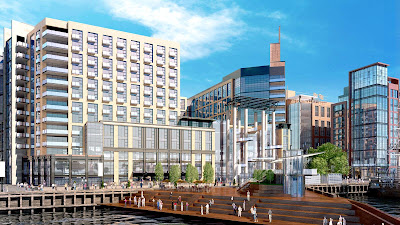 A large crowd gathered last night at the ANC 6D meeting, including a large contingent from the Gangplank Slipholders Association, to hear the presentation given by Hoffman-Madison Waterfront about Phase One of The Wharf and voice their support for the liveaboards - the only people who currently live along the waterfront.   Phase One will be roughly 1.5 million square feet of space and takes up about 2/3 of the development.  Some newer renderings were shown (I hope to get a copy of the presentation). During the presentation, it was learned that the townhomes that were planned for Pier 4 in a future phase of development will no longer be built due to some opposition (including the Army Corps of Engineers). The pier will remain as a commercial pier with a two-story structure - the party boats will still leave from their current location, which has an impact on the proposed Waterfront Park that is planned adjacent to Pier 4 (I will attend a park charrette on Thursday where I will learn more about any changes that will be made to the park because of the change in use for Pier 4).

There was also an explanation of what kinds of events will take place at the Wharf Center, which will be able to hold between 3,500 people (seated) and 5,500 people (standing) depending on the configuration. The Wharf Center will be a marquee venue that can hold corporate events (like at a conference facility at a hotel), cultural programming (similar to what would be presented at the Synagogue at 6th & I and Busboys & Poets), and concerts (like at the Birchmere) with activity between 150 and 180 nights a year. One thing it will not be is a night club, according to Monty Hoffman from PN Hoffman. Some examples of events that could be held at the Wharf Center include: Artomatic, a fashion show, concert, or a film festival/movie premiere.

After the presentation, the ANC explained while they are generally supportive of The Wharf development and have had a good working relationship with the development team, there are a number of issues that need to be resolved before they can endorse the project, such as a tour bus management plan, pedestrian access study, and a traffic study (Here is a link to the motion that lists them all), but paramount among the issues is the transition plan for the liveaboards at Gangplank and how they will be integrated with the development. The management of Gangplank Marina would change with the transfer from the feds/District to Hoffman-Madison Waterfront and the proposed terms of the management agreement would not be economically viable for the liveaboards.  The ANC voted 6-0-1 (Commissioner Craycraft abstained) to not endorse the PUD. They will work with the developers over the next few weeks to come to a resolution on the outstanding issues and may vote again at their July meeting. After the vote, Jason Kopp, President of the Gangplank Slipholders Association stated:

"We are grateful for the ANC and the community's support of the liveaboards as we try to resolve pending issues with the transition and future well-being of Gangplank Marina.  Our hope is that we can work with the city and developers to come up with a solution that is mutually beneficial because ultimately we would like this development to be successful."

Rendering courtesy of Hoffman-Madison Waterfront
Posted by SWill at 9:05 AM

I'm bummed they're not going to redevelop the Pier 4 area. For future vistors arriving via Waterfront station, that area may be the first thing they see along the waterfront. Would be nice to have something new there.

I fully agree with the His Majesty, and would have liked to have at the very least a contingency plan for Pier 4 (facelift perhaps?)

In addition, does anybody know if there exists any thought into building another entrance to the Waterfront Metro station closer to the Wharf? The platform runs down M Street, and with a tunnel and an escalator it could probably come out across from Arena Stage near St.Augustine's.

Runwaysmack: It would be reasonable to assume that Pier 4 will a renovation/upgrade to be comparable to what was originally planned as a new excursion pier further north in the development.

I will try to address the Metro question as L'Enfant Plaza and Smithsonian are both in my District and Waterfront of course serves it.

I don't recall any discussions about a new entrance into the Waterfront Metro but I have requested in testimony to the National Capitol Planning Commission (NCPC) and the DC Office of Planning (DCOP) a new south-facing entrance into L'Enfant Plaza Metro at the NE corner of 7th Street SW and Frontage Road (perhaps in what is now the parking lot for St. Dominic's residences), as well as a new SE-facing entrance into the L'Enfant Promenade shopping arcade, toward the NW corner of 7th St SW and Frontage Road (which would require reopening access around the HUD building).

There is also a proposal for a new Yellow Line stop in Potomac Park as part of the city's current 100-year planning model. I think that is a winner as it would serve the Jefferson Memorial and Tidal Basin from the National Mall and allow people to walk to The Wharf through the Fish Market.

I've heard a new Green and/or Yellow Line stop proposed at 7th & M SW, but as I recall the response was it is logistically impossible due to the split the lines make there.

Thanks for your interest.

About Metro: The following was written on the Wharf website's Q&A section from the Feb-12 SWNA meeting at Arena Stage:

Has it been considered to add an Entrance to Waterfront Metro at Maine Avenue and 6th street?
Near the onset of the design process HMW met with WMATA to discuss the potential of an additional station entrance at Waterfront Metro Stations. Due to a number of engineering, logistical, and financial constraints it was determined by WMATA to not be feasible.

Here is the link to the webpage.

I read it as Pier 4 will be developed, just not with townhomes. I'm really glad they're not building townhomes there, as that does nothing for visitors or the surrounding neighborhood. We have enough residential. We need more commercial, retail, and recreational usage.

Nick: It's my understanding that there are no plans to develop Pier 4 beyond what it is today. Cleaned up a bit but nothing beyond the current two stories and use as a boarding pier for excursion boats. That could change, but that's whaty I understand for now.

I believe that what was voted upon on Monday night was the Stage TWO PUD going forward to the Zoning board for the upcoming 4 hearings. The stage One PUD vote by the ANC and Zoning commission was held last year.

Monte Hoffman also clearly stated that a second story would be added out on the pier to accommodate activities needed for the excursion ships. He intimated that the pier would have to be lengthened as well to accommodation the Odyssey.

SWill,
Any additional info/explanation on all the details of the Army Corps of Engineers and others rejecting the Pier 4 development?
Thanks,
Marc

I don't have many details about the opposition to the townhouses, but the complaint I've heard most from people about them is that the height of the townhouses would be too tall and block views of the channel from Harbor Square. Monty Hoffman mentioned at the meeting that the Army Corps of Engineers had so many regulations related to the townhouses that they decided not to move forward.

Also, dihi's recollection of what was said about the addition to the existing structure on Pier 4 is what I understood was going to happen at that site too. I should find out more about it later today.

"Due to a number of engineering, logistical, and financial constraints it was determined by WMATA to not be feasible."

I'm sure there are people objecting to the townhomes because of potential blocked views. My personal opinion is that piers should be preserved for the few things that need them. A boat needs a pier, but a townhouse can go anywhere. I don't live in Harbor Square, but I'm sympathetic to their concerns. It would be a shame if the waterfront development harmed the longtime loyal waterfront residents, especially when its unnecessary.

I'm at the Commission for Fine Arts hearing and haven't heard this before: the architect for JBG says that the two hotels replacing the Channel Inn will be aloft and Element, two new limited service concepts from Starwood (better known for Sheraton and Westin).

This is in addition to the Intercontinental that HMW has landed for their hotel site. I've stayed at both brands before and really enjoy both.

With regard to a Maine Ave entrance to the Metro were the following two points considered and should they be:

1) The L'Enfant to Waterfront spacing was appropriate when the Waterfront neighborhood was primarily residential. Now that it is well on the way to being very densely developed would a closer spacing of entrances be more appropriate?

2) What about exploring some non-standard financing mechanisms (e.g. The Wharf pays for a portion of the cost of putting an entrance on Maine Ave. In exchange the Waterfront Station -- SEU station could become The Wharf/Waterfront station. Also, could a small additional charge be levied for using the Wharf/Maine Avenue entrance?