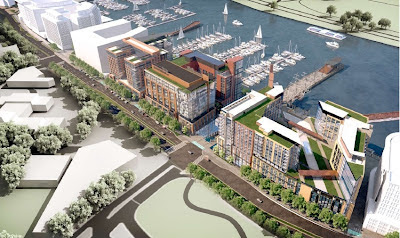 ANC 6D will vote tonight at their monthly meeting on the Stage 2 PUD application for phase one of The Wharf, the redevelopment of the Southwest Waterfront.  Phase One includes the area roughly from 7th Street to the Capital Yacht Club, as well as St. Augustine's Church and the cruise ship parking lot.  Highlights include three mixed income rental apartment buildings, one condo building, The 3,000-seat Wharf Center multipurpose cultural space, a co-generation plant, an office building for The Graduate School USA, an InterContinental Hotel, ground floor retail in all buildings and public spaces such as the Wharf promenade, District Pier, Transit Pier, 7th Street Park, Waterfront Park, and a series of Mews and Alleys.  Tonight's meeting will be held at 1100 4th Street, Second Floor, starting at 7pm. After the ANC vote, the Zoning Commission will hold four meetings to discuss various portions of the development:
If the PUD receives approval, construction on infrastructure will commence in the first half of 2013 with delivery in 2016.

Rendering courtesy of Hoffman-Madison Waterfront
Posted by SWill at 9:05 AM

Vote on the 11-story St. Matthews PUD is also tonight.

Excited to see progress. Thanks for the notice about the meeting! Can you delineate (again) what is Phase 2 and what are the Parcels? I see here a list of items for Phase 1.