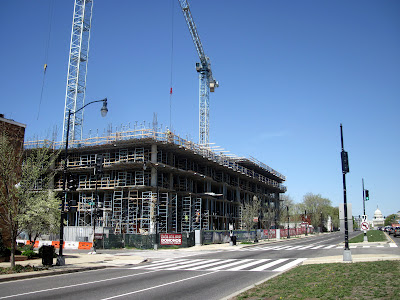 This past weekend, there was a front page article in The Washington Post (online version here) about the impact Nationals Park has played in the development of (primarily) Near SE since the ballpark opened in 2008.  There's some mention of Southwest, although that focus was not on development, but on neighbor reaction to the ballpark (since the nearest residential units in SE are a few blocks away from Nationals Park).  From the article:

Despite the new construction east of the ballpark, the area across [South] Capitol Street in Southwest remains home to low-income housing projects where many residents were worried that baseball would price or push them out of the area.

One block west of the stadium, in front of the Friendly Food Market corner store on Half Street SW, three dealers at an open-air drug market sell marijuana and crack. With four teenagers stationed along the block as lookouts, dealers exchange plastic bags for cash in swift, well-practiced handshakes.

Despite the illegal sales in broad daylight, residents along this Half Street say baseball has been surprisingly good for them. “It made it look presentable around here,” said London Smith, 42, who found work at a stadium concession stand. “I just hope it doesn’t make it more expensive.”

Lovely. It's a bit more difficult to bulldoze all of the low-income housing projects in Southwest than it was to replace Capper Carrollsburg in Near SE, which was already pretty much gone by the time the stadium opened.  For one, funding for HUD's Hope VI program that was used to replace Capper is dried up. The District's version of Hope VI (New Communities Initiative) has been slow to get underway at places such as Barry Farm in SE and Northwest One. Also, there is still some bad blood from the last time wholesale neighborhood demolition took place in Southwest during urban renewal.

While the focus of the article was in Near SE since that is where the stadium is located, there are a few things happening on the west side of South Capitol Street too. For instance, there was no mention in the article about Camden South Capitol, the new apartment building under construction across the street from Nationals Park (although it appears in the photo gallery). In addition, there was no mention of the velodrome coming to Buzzard Point this spring and the new stadium in the works for DC United, which would form a stadium district between Nationals Park and the proposed soccer stadium. Oh well.

Rendering courtesy of WDG Architects
Posted by SWill at 8:37 AM

soccer will be dead in the next 5 years. bring some real innovative development to a beautiful, underutilized waterfront. not a pointless soccer stadium. i haven't heard of a single person mentioning going to a soccer game. soccer? get outta here. i mean if they really want a stadium put it in ward 7 or 8. not on the water. to be honest im afraid baseball may die soon as well. buzzard point is perfect for development but between a velodrome and a soccer stadium i'll never go.

Way to be closed minded. Me, my roomates, my friend from SE, his g/f, his roomate, our friends [just to name a few] ALL go to DC United games on a regular basis and are members of Barra Brava.

Just because YOU don't like Soccer doesn't mean OTHERS don't.

DC United's average attendance per game since 1996, even with a crappy falling down stadium, is 17,238. This is just about 1000 less than the Caps have pulled since moving to the Verizon Center.

Yes, over the last three years when they've been terrible, the per game attendance has been closer to 15,000 per game, but this is normal when a team struggles, and doesn't have much else to offer, like a fresh stadium with nice amenities.

But hey, no one YOU know goes, therefore it must be dead...

Sorry guys - I thought it was dead :/ I've never seen a DC United highlight on ESPN. (lol) I know all about the Wizards, Skins, Caps and Nats but can't name one player on United. Soccer sucks IMO and has no presence in the city now, what will a new stadium change? Buzzard point can do better.

Soccer is the fastest-growing sport in our country, fueled by a rise in the Hispanic/Latino immigration. According to the US Soccer Foundation website (OK, they have a dog in the fight), the number of youth soccer players in the United States has doubled, to 4.04 million players, since 1990.

In the same time period, the number of high school soccer players more than doubled, to 730,106 athletes, the fastest growth rate among *any* major sport, according to statistics compiled by the Sporting Goods Manufacturers Association.

No intramural sport draws the crowds that the soccer games do at Jefferson Field (7th & G), and it's overwhelmingly Latino. I say it's a good way to promote SW to a more diverse and growing DC population. Bring it on.