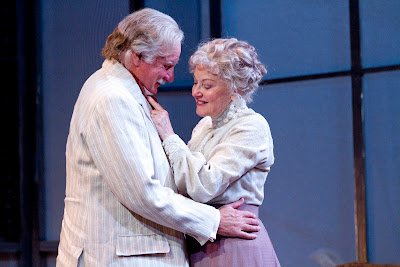 Arena Stage is spearheading the two-month long Eugene O'Neill Festival, celebrating the works of famous American playwright Eugene O'Neill and began running Long Day's Journey Into Night on March 30.  The Pulitzer Prize-winning play is directed by Robin Phillips in his Arena Stage debut. Long Day's Journey Into Night, a candid autobiographical recollection of O'Neill's family, takes place in a New England cottage during the first part of the 20th century. The Tyrones are a dysfunctional Irish-American family with means (although the condition of their summer cottage makes it appear they are poor), and deal with some serious issues and character flaws, including illness, addiction, jealousy, and greed. There are only five characters in the play - Helen Carey plays matriarch Mary Tyrone, Peter Michael Goetz portrays James Tyrone, Sr., Andy Bean plays older brother James Jr., Nathan Darrow is younger brother Edmund and Helen Hedman plays the family maid Cathleen.

Long Day's Journey Into Night reveals how a family deals with adversity while still trying to maintain some semblance of sanity. With just five characters, there is sufficient time to fully develop each of them as the play progresses. My favorite character is Mary Tyrone, whose struggle with substance abuse is compounded by the problems faced by other members of the family, such as her youngest son Edmund's illness. Carey's portrayal of the matriarch is amazing, as Mary starts off as a perfectly normal person, but gradually spirals into a hot mess as the addiction takes over and her grip on reality slips away.  A scene near the end of the play where Mary recalls her days learning to play the piano at a convent was particularly memorable.

Tickets for Long Day's Journey Into Night are $40-$85 and the show runs from March 30 - May 6. While 'Southwest Night' has already passed for this show, where tickets would cost residents and workers only $25, there are other savings programs available. Also be on the lookout on discount websites such as Goldstar for deals.

Photos taken by Scott Suchman and are courtesy of Arena Stage
Posted by SWill at 12:58 AM

In my experience Arena puts on one dud per season, and this one was it. I stopped counting the number of audience members who were dozing off during the performance, though I was glad the folks on the other side of the balcony woke the one gentleman who actually started snoring.