Photos from the Titanic 100 Commemoration 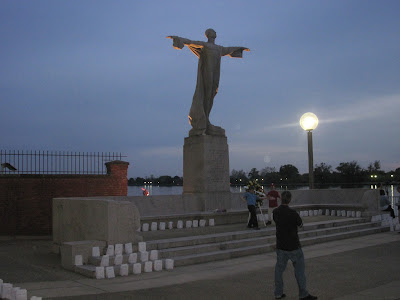 Below are some photos from the Titanic 100 Commemoration Ceremony that took place on Saturday evening along the southern stretch of the Southwest Waterfront at the Titanic Memorial. It was nice to see the waterfront activated with so many people and is a precursor to how it could be once The Wharf development is complete. Period music that was performed on the ship was played during the ceremony and images of the ship were projected on the side of Riverside Condominium. Over 1,000 luminaries were placed along the waterfront - one for every passenger and crew member that was killed when the ship sank. Some people dressed in period clothing as well. If you have any photos you want to submit from the commemoration, feel free to send them to southwest.tlqtc@gmail.com.