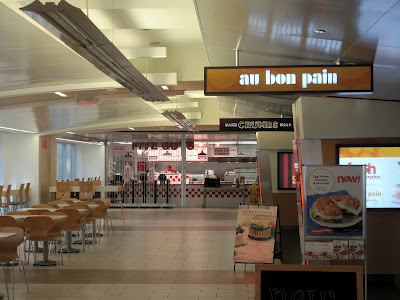 - Five Guys opened last month at L'Enfant Plaza, despite the look of the above photo, which was taken after the restaurant was closed for the day.  Hours of operation are Monday - Friday from 11am to 6pm and Saturday from 11am - 4pm.  Mamma Ilardo's has yet to open at the food court, but most of the other restaurants in the first phase have already opened. 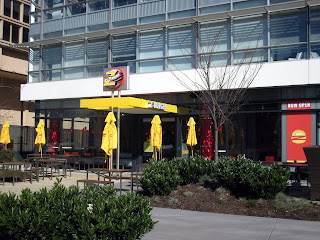 - Z-Burger's owner Peter Tabibian was interviewed by the Washington Business Journal (subscribers only) a while back.  From the article:

The company just invested $800,000 in its fourth location, which is at Waterfront Station in Southwest D.C., and has leases signed for Columbia Heights and Clarendon. It is in talks for seven more. Tabibian is also weighing a franchise model...Tabibian has been picky about his sites and believes it is paying off. Sales at the Tenleytown location have grown 10 to 15 percent each year, and the Waterfront Station store has been collecting $1,500 an hour during lunchtime in its first few weeks. Tabibian picked locations where he can get a good business deal: The waterfront site offers affordable rent, and the landlord kicked in $350,000 to help with building out the store, he said.