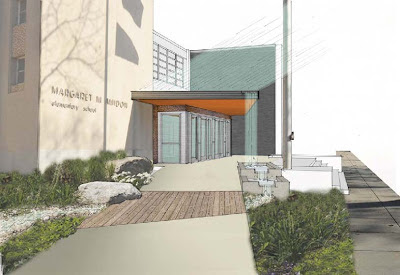 Big changes are underway for Amidon-Bowen Elementary School, the only elementary school in Southwest.  Starting on June 15, the school will begin a modernization program to be done in three phases. Five million dollars has been allocated for Phase One of construction, but funding has not been secured yet for the subsequent phases. Phase One will include a new ADA-compliant entrance, a new administrative office suite, a new walk-through from the front to the play area in back, a new air conditioning system, and re-sized classrooms with technology upgrades and movable walls. Phase Two will improve support components, such as the gymnasium and all-purpose room while Phase Three will improve interior systems. QuinnEvans Architects designed the planned upgrades, which include distinct color schemes for each section of the school to help differentiate spaces for administrative, pre-k, kindergarten, and other grade levels. Landscaping will also be refreshed with native plants and a mini-waterfall system that will capture rainwater and lead the water to a small stream bed. The renovation program complements a $200,000 grant received last summer from Target to redo the school’s library on the second floor with light construction, technology updates, new furniture, carpet and shelves, and 2,000 books.

Construction will be on-going all summer both day and night to get the school ready for the first day of class for students on August 27. The parking lot facing 4th Street SW will be used as a staging area for construction, so those parking spaces will be unavailable for visitors to Westminster Presbyterian Church’s weekly Jazz and Blues Nights located across the street from Amidon-Bowen.

In addition to school modernization efforts, recent personnel changes have taken place at the school. Amidon-Bowen was reconstituted this past year in order to help improve the school’s performance. Test scores for reading and math at Amidon-Bowen have been among the lowest in the city. According to DC Public Schools, only 15% of students at Amidon-Bowen met or exceeded the Washington, DC Comprehensive Assessment System (DC CAS) standards in math and 19% met, or exceeded standards in reading. As a part of the reconstitution, all faculty members had to reapply for their jobs and a new principal, Izabela Miller was hired.

Meanwhile, the operation budget for Amidon-Bowen was cut for the 2012-13 school year. DCPS Chancellor Kaya Henderson stated in an email responding to a letter of concern written by the Near SE/SW Community BenefitsCoordinating Council (CBCC) that the budget cuts were directly tied to the projected decline in student enrollment at Amidon-Bowen. DCPS projects enrollment next year at Amidon-Bowen to be 252 students, the second consecutive year of decline in student enrollment, which places the school in the category of “small schools”, or schools with less than 300 students. As a result, budget cuts throughout DCPS targeted smaller schools to reduce costs since the per student cost at small schools are higher due to economies of scale. Next year, the Art, Music, and Physical Education teachers will become part-time positions instead of full-time. In addition, the Librarian/Media Specialist will become a part-time position as well as the Business Manager. Two teachers and one custodian will be let go, but a part-time School Psychologist will be hired.

Renderings courtesy of Quinn Evans Architects
Posted by SWill at 8:06 AM

Thanks for the updates. It's also my understanding that a school counselor position was eliminated, which is especially unfortunate since it was filled by a young man who seemed to love his job and really connected with the kids, many of whom are lacking positive male role models. It's also too bad that the librarian role will now be reduced after the library was just improved. But the physical changes do look good!

SWill - as always man, thanks for the update.

The first picture looks like there will be some changes to the façade. Is that what you are talking about when you speak of the ADA-compliant entrance?

SWag: A ramp will be added to the left of the main entrance of the school, as shown in the first rendering.

Hey SWill thanks for the answer. I was actually asking though if there will be changes to the façade/exterior of the building. From the rendering it is hard to tell...

SWag: Besides the front entrance area and ramp, there will be no other façade changes as far as I know.

Given Kaya Henderson's goal of closing some small schools, I wonder what will happen to A-B. Personally, I would love if it could be merged with other, higher-performing schools in the area (perhaps on Capitol Hill). A-B could be used for a few grade levels of all the kids for both schools--it seems like early childhood would be a good fit, given that A-B's program seems pretty good. Another option would be to make it an upper grades academy feeding into Jefferson--advanced kids could even be walked over to the jr. high for enrichment classes!

I know it would be insanely unpopular with a lot of people (parents at the higher-scoring school not wanting A-B kids mixed in, families at both schools preferring to send kids close to where they live, etc.) but in my opinion it would be better than what we've got now.

Has there been talk of Amidon becoming a charter school? I thought I heard that somewhere I can't remember.

@Stacy I definitely think your ideas should be explored.