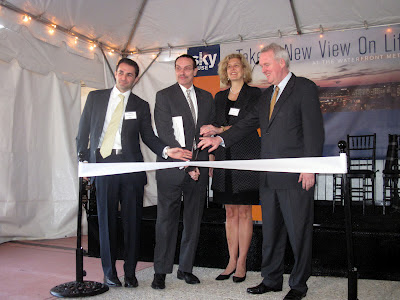 This morning’s commencement ceremony of Sky House Apartments (the adaptive reuse of the former EPA towers) at 4th & M Streets was attended by developers, lenders, architects, as well as community and city leaders including ANC 6D Chair Andy Litsky, Ward 6 Council member Tommy Wells and Mayor Gray. Removal of the concrete skin at the eastern tower actually began last month, but there was an official ribbon cutting today in a tent erected next to the construction site, along with several speeches and a nice breakfast spread. 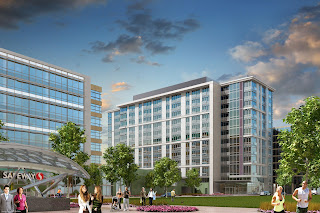 Upon completion, the two towers will have a total of 530 apartments with 106 affordable units (20% of the total) for those earning up to 50% of Area Median Income (AMI) and will be the tallest residential buildings in Southwest.  The project is a partnership between Urban Atlantic and The JBG Companies, with exterior design by Wiencek + Associates and interior design by RD Jones & Associates.  Urban Atlantic purchased the buildings from Waterfront Associates in 2011 for $10 million. In addition to Sky House apartments, Urban Atlantic has a mixed-use project next to the Rhode Island Avenue Metro station that’s about to deliver, and are a partner in the Capper Carrollsburg Hope VI redevelopment in Near SE. Vicki Davis, President of Urban Atlantic stated during the commencement ceremony:

We are confident that Sky House will appeal to a variety of individuals seeking luxury living amidst the exciting ambiance of the Southwest Waterfront. The apartments are beautifully designed with a full range of lifestyle amenities.

A description of the planned amenities can be found here.  In addition, a few new renderings were released, as seen above and below:

Renderings courtesy of Wiencek + Associates
Posted by SWill at 11:29 PM

I always appreciate the high-quality renderings you seem to get a hold of for your posts, as compared to the miniature pictures other blogs embed from screenshots they took. Thank you!

Thanks for the update

Do you have any info on the proposed St. Matthew's development on 3rd and M? They'll be before the Zoning Commission Monday, March 19, 6:30 pm to try to convince the commission to wave restrictions for height, set back, green space, and parking. They didn't inform the neighbors at Carrollsburg A Condominium and seem to be trying to sneak this past the neighborhood. They're proposing two apartment buildings (11-story and 9-story buildings), a church, community center, and coffee shop. Have you ever seen how small that lot is?