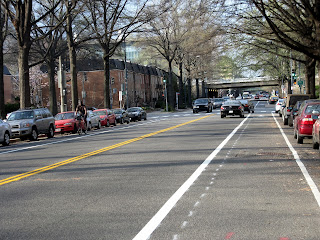 Bike lanes have been installed along 4th Street from School Street to I Street and also on I Street from 7th Street to 6th Street & 3rd Street to South Capitol Street and beyond. Above is a photo of the new bike lanes on the 800 block of 4th Street. Eventually, the 4th Street bike lanes will go north all the way to Pennsylvania Avenue and south to P Street. Bike lanes were installed on 4th between I Street and M Street when that road reopened in 2010 and the rest of the street was supposed to be completed the same year, but the installation was delayed. Renovations are ongoing at the Mary E. Switzer federal office building between C & D Streets, closing off part of 4th Street, so I imagine once that is complete, the bike lanes will be installed to connect residential Southwest to the National Mall.  Several bikers already use 4th Street as a commuter route and there are two Capital Bikeshare stations on the street - one at Waterfront Station (4th & M Streets) and the other next to Patriots Plaza (4th & E Streets).  The pre-existing I Street bike lanes were installed a couple of years ago from 6th Street to 3rd Street.   According to the DC Bicycle Master Plan, bike lanes will also be installed on 3rd Street between I and M Streets, portions of M Street, 1st Street, O Street, and Potomac Avenue.
Posted by SWill at 10:19 AM

I am definitely one of those commuters. This is a great development. Next step, though: more bike racks! Not just a SW problem... it's very difficult to find a real bike rack anywhere in the city. Just saying! But DC is becoming super bike friendly, step-by-step, and I love it!