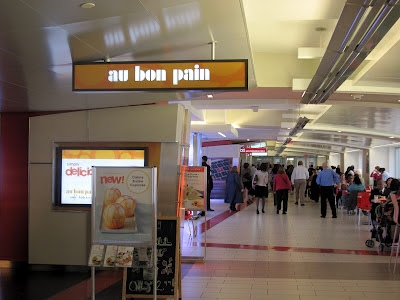 L’Enfant Plaza’s retail center transformation continues moving forward, which began back in 2009. The retail center, two office buildings, and a hotel at the massive complex are owned by The JBG Companies and the renovated retail center was designed by SmithGroup. Now open at the food court: Potbelly Sandwich Works, Moe’s Southwest Grill, Starbucks, Crumbs Bake Shop, Roti Mediterranean Grill, Au Bon Pain, Frozen Yogurt Indulgence, Gourmet Too, Mina’s Boutique, Nash’s Mens Wear, 4-U, Hallmark Cards, Gateway Newsstand, Jay Jewelers, a sports injury rehab center, and a post office. A few other retailers are still scheduled to open over the next few months, including Five Guys and Mamma Ilardo’s.  Several of the restaurants are open beyond 5pm during the work week and are also open on Saturday.

Construction on Phase II is underway and demolition will soon begin on the western portion of the existing retail center with completion scheduled for the third quarter of 2013. Many retailers have expressed interest in coming to Phase II of the retail center, according to Matt Ginivan of JBG, who attended the International Council of Shopping Centers conference last week at National Harbor. Some of the targeted retailers at Phase II include sit down restaurants, as well as a fitness center and child care facility.

A couple of weeks ago, the Commission of Fine Arts approved designs for the grand glass atrium entryway planned for the plaza in Phase II; however, ZGF (Zimmer Gunsul Frasca) needs to go back to the drawing table on the planned office building on Frontage Road since the commission requested a number of changes to those preliminary designs.

Meanwhile, renovations are also underway on the east office tower, which includes the addition of glass to the lobby area to give it some “pop” and compliments the glass atrium planned for the plaza. The hotel above the east office building was recently renovated and construction on a new extended-stay Homewood Suites hotel will get underway at 9th and D Street this summer. The addition of windows at the food court, as well as the new atrium and office lobby improvements in the east tower will add more light throughout the complex. Eventually, an office building is planned for the plaza itself, but those plans are still preliminary.

Even though L’Enfant Plaza is geographically close to the residential area of Southwest, access to the complex by foot is daunting. In the intermediate and long-term, there are plans to make improvements. The developer is looking to eventually improve pedestrian connections from the south with the construction of the proposed Frontage Road office building.  As a part of the Southwest Ecodistrict initiative, there are plans to remake 10th Street into a pedestrian-friendly street that will better connect L’Enfant Plaza to The Wharf development and the rest of Southwest. In addition, the DC Office of Planning has been working on the Maryland Avenue Draft Plan in conjunction with the Southwest Ecodistrict which calls for a new south entrance to the L’Enfant Plaza Metro station.

Renderings courtesy of SmithGroup
Posted by SWill at 9:30 AM

Not to sound ungrateful,but... what is it that is supposed to attract me to L'Enfant Plaza again??