- The PAWS of SW will be submitting an application to the Department of Parks and Recreation (DPR) to create an off-leash dog park at Lansburg Park since Southwest is the only quadrant in the city without a dog park. They will be working with the newly created "Friends of Lansburg Park" to do fundraising and organize community events, with the support of SWNA. Over $100,000 is needed to build the dog park, which will go towards ground modification, fencing, running water, and to make the site ADA accessible.  A minimum of 5,000 square feet is needed for a dog park, but the proposed dog park will not take up all of Lansburg Park. Other uses are being explored for the large, underutilized green space, including a playground, community garden, and skate park. The PAWS of SW meets at the SW Library on the first Wednesday of every month and they have a Google Group (sw-dog-park@googlegroups.com). 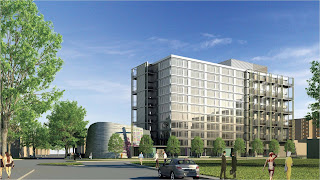 - The development team behind the St. Matthew's church and multifamily housing project met with the Zoning Commission last week to get approval for their PUD application.  There were so many people who wanted to testify at the meeting that it was adjourned until March 19.   Neighbors of the proposed development have created an online petition in opposition to the development. Below is a video of the March 5 meeting in case you are so inclined to watch the meeting. Rendering courtesy of Shalom Baranes Architects 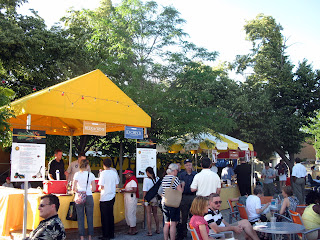 - Hoffman-Madison Waterfront is proposing to offer wine and beer sales at 7th Street Landing this season on Thursdays, Fridays, and Saturdays. Last year, beer and wine was sold only on Thursdays during the farmers market. The farmers market will be back on Thursday evenings with jazz performances starting on June 7 for approximately 16 weeks.  Friday evenings will bring community entertainment, while YaLa and yoga will return on Saturday mornings.  New this year will be family-friendly movie screenings on Saturday evenings. Sundays will be dedicated to recreation, including bocce, table tennis, and cornhole.

-  Renovations are planned this summer at Amidon-Bowen Elementary school.  Phase 1 will include a new administrative office suite at the front of the school, a new walk-through from the front to the play area in back, re-sized classrooms, and a new ADA-compliant entrance. All of the renovations will be complete by the end of August.  Last summer, Target donated funds to renovate the school's library. There will be an open house on Tuesday, April 10 from 6-7pm at the school where the plans will be shared with the community.

- Two Capital Bikeshare stations were installed today on the National Mall.  One is located on Jefferson Drive between 14th and 15th Streets by the Washington Monument and the other is on Ohio Drive near the Martin Luther King, Jr. National Memorial.  Three more stations will be installed over the coming weeks. 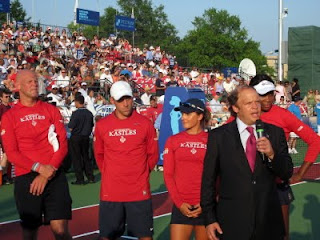 - The Washington Kastles have completed their roster selection and will bring back most of the team from last season, including Captain Leander Paes, Bobby Reynolds, and Arina Rodionova. Replacing retired player Rennae Stubbs will be Arina's sister Anastasia Rodionova.  The Kastles will have two sets of siblings with the Rodionovas and the Williams sisters, who will also return this season.

- The Housing Complex blog describes how the Hoffman-Madison Waterfront team will preserve and restore the Oyster Shucking Shed and Lunch Room at the Maine Avenue Fish Market as a component of The Wharf development.  Currently, the white buildings at the market are vacant and in disrepair.  From the post:


The currently unused Oyster Shucking Shed and Lunch Room, a pair of ramshackle buildings surrounded by vending machines and ice boxes, will become a "centerpiece," according to a spokesman for the Deputy Mayor for Planning and Economic Development. They've submitted an historic landmark application for the seemingly nondescript structures, which were built in 1916 and are now literally falling apart inside. They retain enough integrity, though, to "serve as reminders of the Southwest Waterfront's historic commercial and maritime industries." According to the application, the Lunch Room was home to the Cadillac Restaurant from the 1940s through the 1970s, while fish dealers used the shucking shed to prepare their catch for sale. 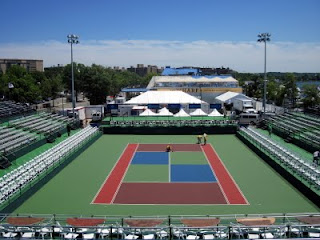 - LivingSocial is hosting a Craft Beer and Food Truck Festival at Kastles Stadium at The Wharf on the weekend of April 21-22 from 12-5pm. There will be 25 craft brewery tents, live local music, 10 food trucks, and backyard lawn games and activities. LivingSocial is currently offering a package for $35 on their website.
Posted by SWill at 11:44 PM

I'm part of the dog park group and would like to correct something you wrote in your article.

The dog park will not take up "all of Lansburg Park". This is a common misconception and one that we would like to clear up so people don't think we are trying to fence off all the green space in SW for the dogs. The dog park will take up less and 15-20% of the total space at Lansburg park. There will be more than enough space for other activities and the community garden.

We are only looking to utilize area between seating area and the brick wall. Essentially the area furthest from housing and also out of the way where people would congregate.

Thank you,
Kate - Paw of SW

Kate: I must have had a brain fart when I wrote that sentence because I meant to say it will not take up the entire park (which is why I added the next sentence about the other uses planned for the park). The error has been fixed!