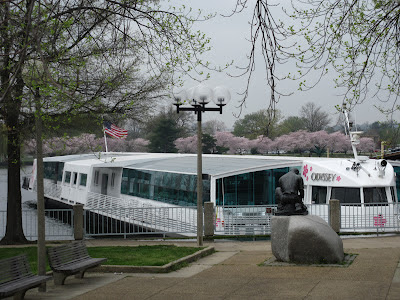 The cherry blossoms may be peaking early, but there's still plenty of time left to celebrate the annual National Cherry Blossom Festival in Southwest, which has been extended this year to five weeks to commemorate the 100th anniversary of the gift of trees from Tokyo to Washington, DC.  The Odyssey, Spirit of Washington, and Capital Elite cruise ships from Entertainment Cruises have been "planted" with cherry blossoms for the occasion as the "first blooms on the Potomac." 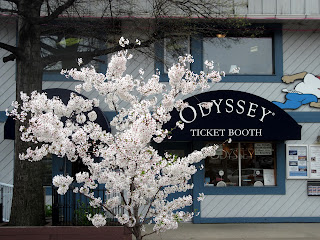 The Odyssey cruise ship, which is docked next to Cantina Marina, will be offering lunch, brunch, and dinner cruises with a specialty Cherry Blossom Centennial dessert from March 24 until April 8.  In addition, the Capital Elite yacht will offer two 45-minute sightseeing tours each day (at 2pm and 4pm) along the Washington Channel and Potomac River to see the blossoms.  On Saturday, April 7, both the Odyssey and the Spirit of Washington will offer Cherry Blossom Festival Fireworks cruises, which will be set off along the Washington Channel. For more information on schedules and pricing, check out the Entertainment Cruises website.
﻿

﻿Prior to the fireworks show at 8:30pm on April 7, there will be over seven hours of free entertainment along with food and drink at the Southwest Waterfront Fireworks Festival, which begins at 1pm. Last year's large-scale festival was a dry run for 2012, which will be even bigger to celebrate the 100-year anniversary of the gift of trees. Several stages will be set up along the waterfront, including Kastles Stadium at The Wharf, the Washington Channel Stage, Gangplank Marina Park, and 7th Street Landing. Each of the stages will have different activities, including live music, a beach with a waterfront beer & sake garden, food trucks, arts & crafts, face painting, origami-making, roving street performers, and more. Check out the latest issue of The Southwester for a 2-page pull-out with details.
﻿﻿﻿﻿
﻿﻿﻿

﻿In the evening, there will be some special tributes right before the fireworks show, including the illumination of vessels along the seawall in pink, a theatrical performance by Dance Afire, a school of swimming Koi, and an imaginative pink flaming salute to the Centennial Celebration. This year's fireworks show will feature special Japanese fireworks presented by the City of Nagaoka, Japan and the mayor of that city is expected to attend. The Southwest Waterfront Fireworks Festival is produced by the National Cherry Blossom Festival, Washington Waterfront Association, and Hoffman-Madison Waterfront.
Posted by SWill at 7:36 PM