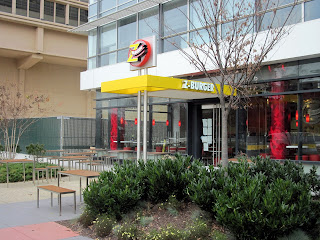 After several months of unforeseen build-out delays, Z-Burger finally received its certificate of occupancy on Friday and will officially open on Tuesday at Waterfront Station.  The hours of operation are as follows:

About 25 employees have been hired at the store with some of them being Southwest residents. This is the fourth Z-Burger restaurant to open since the concept was born about four years ago. Other locations include Tenleytown, Glover Park, and White Marsh.  Two other locations are planned in Columbia Heights (set to open next month) and in Arlington.  Peter Tabibian, the owner, plans to open several other locations in the next few years.  Despite the added expense needed to overcome the delays (including paying rent for several months in an unopened restaurant) Peter is bullish on the success of his new restaurant in Southwest.

Below are some photos I took of the interior back on Friday.  It was really bright outside, so some of the photos came out a bit dark...

I love those fancy soda machines. They look like something out of Star Trek.

Oh No, looks like the veggie burger wont be offered at this location? Just lost a customer.

SWDrew: They do have the veggie burger. If you click on the photo with the register, you'll see one of the menu boards with vegetarian options.

P.S. Made me think of a new product idea: Earl Grey/Bergamot flavored soda? Anybody? I'd give it a shot...

I have not tried the other Z-Burger places, but I'm looking forward to trying this one. The shakes/malts menu looks mighty fine!

will there be any opening day or week give-aways?

any promotions for the first week? think i will pick up food tomorrow if its not too busy. so excited!

swelizabeth & Caity Rose: Z-Burger is known for doing giveaways, but I'm not aware of any specifics for the SW opening.

I just ate there.

Positives:
was crowded-lots of people from the neighborhood. YAY! lets support a local business!

lots of staff on hand to handle the crowds.

they have turkey and veggie burgers

negatives (and really, for some, is it a negative?)

i got the smaller order of french fries and it was still enough for 3people. they need to have a kiddie size available.

but all in all, glad they are now open. i hope our sw community actively supports them.

burger and fries were very similar to five guys. This is a fun and reasonably priced option.

(yes the fries were huge...exactly like five guys. they need to compete)