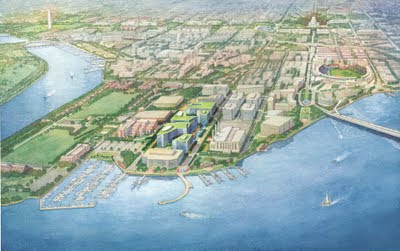 The Washington Post reported yesterday that a lease has been signed to allow DC Velodrome, a local 501c3 non-profit corporation, to erect a velodrome on part of the 100 V Street parcel owned by Akridge in Buzzard Point. Last fall, the group probably jumped the gun a bit when listing Akridge as a partner on their website, which created speculation in the blogosphere that a velodrome would be built at 100 V Street.  Now that the lease is a done deal, Akridge has acknowledged the agreement.  From the article:

"Locating D.C.'s first velodrome on Buzzard Point is an exciting contribution to the vitality of the neighborhood and the diversity of activities available to the city and the region, while still keeping the site readily available for permanent development," Akridge President Matt Klein said in a statement.

Speaking of permanent development, it was reported earlier this week that DC United was close to signing a lease with the city to remain at RFK Stadium for two more years and that these talks could help spur a final push to build a new stadium for the team, the leading candidate site reportedly being 100 V Street.  Originally, the 100 V Street site was positioned as a secure federal campus, but the office market has been slow to recover from the latest recession and the GSA has cut back on leasing activity.

The article states that DC Velodrome plans to open the velodrome by late May or early June, but they are in the process of raising $300,000 to help assemble the track and provide free programming. It doesn't mention in the article the length of the lease, but according to the group's website, the portable cycling track would be up for 3-5 years, leased from Major League Cycling in Lancaster, PA. From the website:

Basic facilities, including a perimeter fence for security, small grandstands, public address/sound system, lights, portable toilets, and a snack bar/storage building of a temporary nature will be installed on site.  There will be parking for approximately 50 cars.

The next couple of years will bring some major changes to the area by the velodrome site.  Right around the same time that the velodrome is scheduled to open, Pepco will decommission the Buzzard Point Power Plant across 1st Street and next year, the U.S. Coast Guard is supposed to move from 2100 2nd Street to their new headquarters at St. Elizabeths in SE.

Rendering of the Buzzard Point neighborhood courtesy of Akridge
Posted by SWill at 11:46 PM