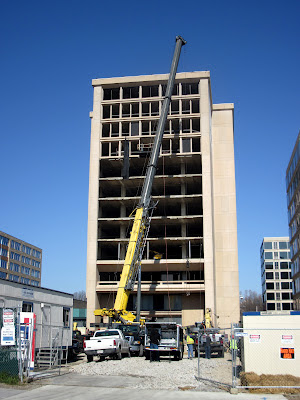 Over the past couple of weeks, demolition has been underway at the former EPA east tower at Waterfront Station.  Windows have been taken out and part of the concrete skin has been removed.  In its place will be Sky House I, a 266-unit apartment building. More details on what's planned can be found here. Below are a couple photos taken last week:


Update: A new website has been created for the project, although there isn't much information on it right now. There will be a mix of studio, one-bedroom, and two-bedroom apartments. A media advisory describes the apartments as containing sleek interior designs, upscale fixtures, floor-to-ceiling windows, hardwood flooring, and contemporary kitchens. In addition, the project amenities will include a roof deck with pool, e-lounge, resident clubroom with gaming elements, pool table and movie screening area, gym with yoga studio, and an outdoor courtyard with sitting areas, TVs, gas fireplace and grills. An official commencement ceremony will take place on Monday, March 12 at 9:30am.  Dignitaries will be present, including Mayor Gray.  It appears that construction on Sky House II with 264 units will now begin in the spring of 2013 instead of May 2012.
Posted by SWill at 7:29 AM