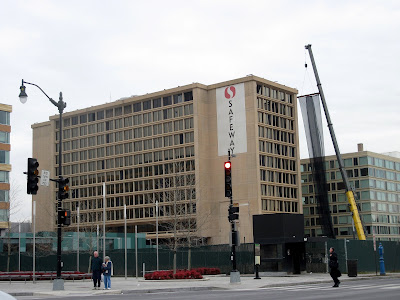 According to Vicki Davis of Urban-Atlantic (and shown in the above photo), a construction crane arrived on site yesterday at the former EPA East tower at Waterfront Station to start removing the concrete skin of the building.  In about 22 months, the building will be reborn as Sky House I, a 265-unit multifamily building with an address of 1150 4th Street.  Its sister building across 4th Street (1151 4th Street) with approximately 252 units will begin construction in May.  Twenty percent of the units will be set aside as affordable housing.  The buildings have been designed by Wiencek & Associates, who made some slight changes to the plans designed originally by Shalom Baranes Associates (the older Baranes design is shown below). It was reported a couple months ago that the buildings would be called Waterside Metro Lofts, but apparently that was just a working name given to the project.  Ms. Davis and her colleague Alan Lederman gave an informal presentation at Monday's ANC 6D meeting and provided some additional details on the project (The JBG Companies is also involved with the project).

Each building will have a different ownership structure. Both buildings will have similar amenities, although the placement of some of them will be slightly different and the design will differ.  Chevy Chase, MD-based RD Jones + Associates has designed the interiors to give the common areas of each building a boutique hotel-feel. At Sky House I (1150 4th Street), the main entrance will be off of the multicolored roadway that runs past Safeway.  The entrance opens up to an open lobby area with an e-lounge, fitness center, club room and "we work" area, designed with hardwood floors and a darker color palette.  A stairway leads to the second level of common area space with a large demonstration kitchen and entertainment area with gaming.  Doors lead to an outdoor space on the second floor that sits on top of the parking garage entrance with a garden, seating area, and beyond that the green roof installed by Waterfront Associates on top of the Safeway loading dock.

At Sky House II (1151 4th Street), the main entrance will be off of the multicolored roadway that runs in front of Z-Burger. The entrance opens up to a lobby and e-lounge with a light-colored palette and limestone floors.  To the right will be a club room with a kitchen, fitness center, entertainment area with gaming, and a "we work" area.  Some of the interior common areas on the first floor will open up to an extended garden area that separates the residential building from the 1101 4th Street office building. This outdoor space will be a private, walled garden area with a fire pit, seating, plantings, and perhaps an artificial turf area.

The average unit size will be around 675 square feet, continuing the trend of smaller units in newer apartment buildings.  Both buildings will have a small green roof and shallow swimming pool.  Panoramic skyline views will be enjoyed from the rooftops of both buildings, due to the lack of taller buildings in the area.  Each building will have 140 shared parking spaces with the office tenants at 1100 and 1101 4th Street.  Driveways will be created from M Street to connect to the multicolored roadways that already exist to create a loop of sorts.  The introduction of vehicular traffic to these interior roadways will need to be managed properly since pedestrians have become accustomed to the lack of cars, especially in front of Safeway.  The basements will have plenty of bike storage and for you pet lovers pet washing stations. The buildings will be at least LEED-certified, but the developers are aiming for a higher ranking, perhaps Silver.  A dust control program is in place by the general contractor Hamel Builders to minimize dust during construction.

It hasn't been determined yet whether the buildings will be condos or apartments, but Ms. Davis says due to market conditions, they will more likely be apartments.  With the prospect of over 1,000 apartment units delivering in 2013-14 in Southwest (including St. Matthew's, Camden South Capitol, and Sky House I&II) after decades of zero new apartments being built in the neighborhood, perhaps one of these buildings should become condos. A groundbreaking ceremony is planned for Monday, March 12 at 9:30am.

Interior sketches courtesy of Urban-Atlantic
Posted by SWill at 5:57 PM

Do you have any information for signing up to rent a unit in this building Affordable or regualr units.