They Got a Pepper Bar!!! 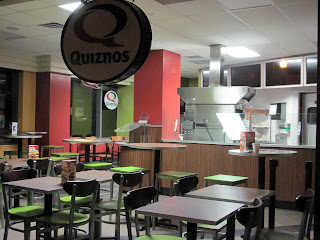 Quiznos looks like it is almost ready to open on the ground floor of the Washington Office Center on top of the Federal Center SW Metro. It replaces another sandwich shop, which apparently was evicted by the landlord. Other retailers on the ground floor of the office building at 3rd & D Street include a florist, credit union, cafe, Potbelly Sandwich Works (yes, another sandwich shop), Starbucks, FedEx Office, and Gold's Gym. The restaurant's hours of operation will be the following:

Quiznos is supposed to open next week and will be less than three blocks from another Quiznos on C Street. Sandwich shops don't worry too much about cannibalization. Subway, for instance, has several sandwich shops in close proximity to each other.

- In other restaurant news, Z-Burger has a Now Hiring sign in front of the restaurant. They are looking for all positions (send resumes to Peter at info@zburger.com). At Monday's ANC meeting, it was announced that the restaurant would open in two weeks, but my best guess is it will take a little longer since applications need to be screened, interviews done, workers hired, and then trained on new equipment.  It seems overly ambitious to do in two weeks...

- Station 4 is now offering a coffee happy hour daily from 3-5pm. Coffee and desserts are half off and there is free WiFi available.
Posted by SWill at 6:31 AM

Glad to see the 7pm closing time. Combined with the two Pizza Autentica locations and Roti and Potbelly in L'Enfant Plaza there is slow but steady movement towards Federal Southwest not being a ghost town after 5pm.