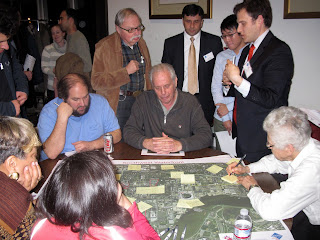 DDOT held the first of three community meetings this evening to kick-off the M Street SE/SW Transportation Study, which has been a LONG time coming. The study area boundary includes the Southeast-Southwest Freeway to the north, 14th Street, SW and the Washington Channel to the west, the Anacostia River to the south, and 12th Street, SE to the east. During the nine-month study period, DDOT will work with CH2MHILL to identify current and future transportation issues and mitigation strategies along the M Street SE/SW Corridor and the Southwest/Southeast Waterfronts. A great deal of development is coming to the area and a comprehensive study is needed. DDOT will look at more than 30 other studies that have been done previously by others, including individual developers and the Complete Streets study that Ward 6 Council member Tommy Wells and the Capitol Riverfront BID commissioned a couple years ago. Tonight's meeting allowed residents to gather around maps of three areas of focus (the Southwest Waterfront, the Ballpark District, and the SE Federal Center) and provide input on issues or challenges in those areas. On the Southwest Waterfront map, some of the issues mentioned by residents include the 4th & M Street intersection, lack of connectivity between Southwest and Near SE, commuters using P Street as a cut-through to avoid M Street, sidewalks, and parking, among other things. The next public meeting will be held in the spring and a third meeting will be in June. A stakeholder survey is available on the project website and is due on January 31 at 5pm.
Posted by SWill at 11:55 PM