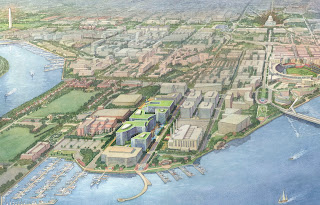 DCist reported today that DC Velodrome, a 501c3 organization, is in negotiations to lease space to build a temporary velodrome near Nationals Park. The proposed site, thanks to the investigative skills of JDLand appears to be the southern-most block of Akridge's 100 V Street in Buzzard Point. Here is a description of the proposed velodrome from DC Velodrome's website:

Preliminary (3-to-5 year) plans call for the assembly of a portable cycling track which will be leased from Major League Cycling, Lancaster, Pennsylvania. Basic facilities, including a perimeter fence for security, small grandstands, public address/sound system, lights, portable toilets, and a snack bar/storage building of a temporary nature will be installed on site. There will be parking for approximately 50 cars.

According to the DCist article, the non-profit plans to raise $300,000 to operate the velodrome for the first year, with costs to decline in subsequent years. News of the velodrome negotiations come on the same day that Ward 6 Council member Tommy Wells introduced a resolution in the DC Council that would encourage the city to keep DC United in the District. While the resolution doesn't spell out how the city should proceed with building a soccer stadium, the leading site for the team as reported in the media is 100 V Street. Mayor Gray attended a SWNA meeting last week where he stated that he met with DC United officials the prior week and stated his support for keeping the team in the District. However, he also stated that the city doesn't have the money to build the team a new stadium. Rendering of 100 V Street courtesy of Akridge.
Posted by SWill at 10:57 PM

Wow, this is super exciting news out of left field! It sounds like the track that Major League Cycling owns is the original Vandedrome, which once hosted bike races in downtown Chicago. If it's that easy to set up, it should be relatively easy to relocate when Buzzard development commences -- perhaps to Reservation 13 or another local recreational area.