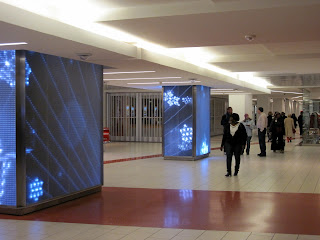 This evening was L'Enfant Plaza Community Night for residents of ANC 6D hosted by JBG where an update was given to the community about what is planned for the massive mixed use complex. Each attendee was given $15 to use at any of the restaurants or retail shops, which have continued to open over the past few months at the refurbished retail center designed by SmithGroup. Now Open: Roti Mediterranean Grill, Potbelly Sandwich Works, Moe's Southwest Grill, Au Bon Pain, Starbucks, Frozen Yogurt Indulgence, Gourmet Too, Gateway Newstands, Mina, Nash's Mens Wear, 4-U, Hallmark, and a post office.  In addition, Jay's Jewelers appears to be just about ready to open. Three LED panels have been installed on pillars to give some visual interest and change periodically - as seen above, the panels were projecting snowflakes at the time the photo was taken.

Britt Snyder, VP of Development at JBG, gave some details about what is planned for the complex over the near and medium-term. Tenant build-out continues for some of the restaurants and retailers yet to open in the first phase, but construction of phase two has begun, which will bring double the amount of space that is already complete by 2013. To complement the LED panels in the food court, a video wall displaying art will soon be installed near the Metro entrance and TV screens will be placed in the second phase food court along with soft seating areas. They are hoping to bring a fitness center and child care facility to the second phase, but talks with grocers to open a small store were not successful. Some sit-down restaurants are envisioned for the second food court and they hope to "push the envelope" with having some of the stores stay open later and on weekends. A large atrium will replace the pyramid skylight and provide a grand entry to the retail center from the plaza.

Construction of a Homewood Suites extended stay hotel at 9th and D Street has been pushed back to the summer or fall of 2012. Entrances to the new hotel will be created along D Street and from the plaza. The hotel will be built to be LEED-Certified (either Silver or Gold).

In the medium term, a 200,000 SF office building is planned for the southeast corner of the complex along Frontage Road. Residential was considered for this parcel, but it was not feasible to build since rents in the area are currently not high enough to justify the expense. The lack of a grocery store in the area was also an impediment (although Safeway isn't THAT far away - it's closer than for residents of Near SE). Pedestrian connections from the south to L'Enfant Plaza are being looked at to be improved. Eventually, the developer would like to construct an office building in the plaza.

Below are some additional photos of the new retail center:

It is nice to have new food options in the neighborhood. When is the pizza place opening?

The other restaurants will open over the next few months as their build-outs are completed.

This is great. Speaking of food options.... any updates on Z Burger?