The DC Office of Planning released its draft report on the Maryland Avenue SW Plan earlier this month after working on it for several months. This report is a component of the Southwest Ecodistrict Initiative that the National Capital Planning Commission is studying for the area. In the Maryland Avenue SW draft report, there are recommendations on how the avenue can be reconstructed, diversify land uses, and serve as a connector through the Southwest Rectangle (the area between the National Mall and Interstate 395). Currently, the Maryland Avenue corridor is disjointed – a small section of the avenue was rebuilt above railroad tracks west of 12th Street as a part of The Portals complex with a landscaped median and on its eastern end, it will bisect a future memorial for President Eisenhower. However, Maryland Avenue doesn’t exist between 12th Street and 7th Street. Along this stretch, railroad tracks for freight and VRE are in the avenue’s right-of-way. East of Reservation 113 (the green space at 7th & C Streets), Maryland Avenue reemerges before intersecting with Independence Avenue across from the National Air & Space Museum.

Four components that the draft report addresses include land use, transit, connections, and public realm:

Land use
The draft report encourages a diversification of land uses for the corridor, which is currently dominated by office space. To that end, there are four Federally-owned parcels along Maryland Avenue that the GSA is considering for conveyance out of the Federal inventory. These parcels could then be redeveloped as mixed use sites, potentially with residential included in the mix. Zoning in the area can be changed to encourage residential development with Housing Credits, similar to the bonus density incentives used to increase housing downtown over the past 15 years. Other parcels along the Maryland Avenue corridor could also be redeveloped, including the GSA Regional Office Building at 7th & D Street, the Reporters Building (where Pizza Autentica is located), and two sites at The Portals (perhaps one could be luxury condos affiliated with the Mandarin Oriental Hotel next door with sweeping views of the Tidal Basin?). The draft report indicates at least 1,000 residential/hotel units need to be created in the area to justify the creation of more retail amenities. 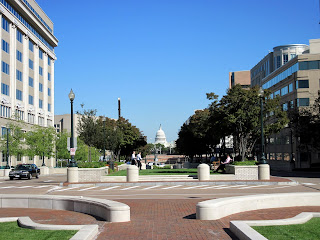 Connections
Three alternatives were considered for decking over Maryland Avenue: one creates a boulevard with a landscaped median along its length and a newly constructed 9th Street would connect Independence Avenue, Maryland Avenue, and D Street; a second would create a center roadway section from 12th to 10th Street with a ramp connection to D Street, while the area between 10th Street and Reservation 113 would become a linear park; option three would create a center roadway from 12th Street to Reservation 113 and create a square around it by shifting the railroad corridor to the south. The report prefers a center roadway section to a median because of its consistency along the centerline of Maryland Avenue, but also allows flexibility along the edges depending on what structure abuts the right-of-way. The approximate cost to re-establish Maryland Avenue would be $429M, including streetscape, railroad enclosure, commuter rail station improvements, connections to the street grid, and four-track railroad enhancements. 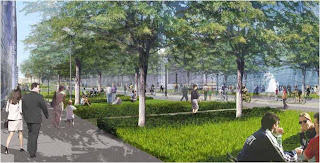 Public Realm
Reservation 113 has the potential – if designed properly, to be a center piece for the neighborhood. Views to the Capitol should be maintained and Maryland Avenue’s significance as a L’Enfant diagonal street should be considered in its design; however, pedestrian-scale elements need to be considered as well. The tree canopy of the area needs to be enhanced and sidewalks designed for heavy pedestrian use. New buildings along the corridor should be oriented towards Maryland Avenue and Reservation 113 with the building facades meeting the edge of the right-of-way to create a defined street wall effect. Retail nodes should be created at 7th and 10th Streets with ceiling heights along the ground floor at these locations at a minimum of 14’. Sustainable infrastructure elements should be maintained throughout the corridor, including storm water filtration and collection, and piezoelectric generation along the rail corridor.

Development along the Maryland Avenue corridor can begin in the eastern end between 6th & 7th Streets, where the avenue already exists and improvements would take less time (and money) to implement. The Switzer Building modernization and greening, along with Federal Building 8, is breathing new life to the area. GSA Parcel 4 is located between 6th & 7th Streets and if conveyed, the parcel could be redeveloped into a use other than office to help change the perception of the area as an “office-only” destination. In addition, some improvements can be made to Reservation 113 to make the area more inviting. As the Southwest Waterfront redevelopment gets going and the future of the Department of Energy campus is determined, that will help spur activity on the western side of the Maryland Avenue corridor.

The full report can be accessed from OP’s website and the 30-day comment period is now open until February 3.

Renderings courtesy of DC Office of Planning
Posted by SWill at 5:29 PM

Thanks for the excellent recap, Will. There will be a presentation to the ANC by the DC Department of Planning on Monday, January 9th, 7:00pm at 1100 Fourth Street, S.W., 2nd floor conference room. Interested community members are invited to attend.