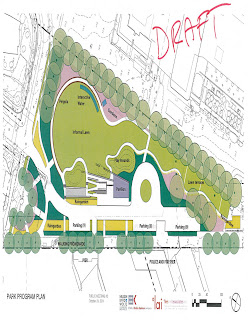 The landscape architects charged with designing the planned waterfront park at The Wharf came to  the October 24 SWNA meeting and presented their initial concept. Warren Byrd from Nelson Byrd Woltz Landscape Architects gave the presentation. The initial concept design was the result of the charrette process held over the past couple of months with community members that was convened by Hoffman-Madison Waterfront, and attended by representatives from Byrd Woltz Landscape Architects, as well as Lee and Associates Inc., the other landscape architectural firm involved with the park.  At the second charrette in early October, the participants walked through the site, then went over two alternatives for the park based on the discussion from the first charrette - one with an oval shape and the other shaped like a fan.
The 4.2-acre park will replace the parking lot for the cruise ships on the south end of the Southwest waterfront by the police and fire pier. As seen in the above rendering, the design is similar in shape to a fan. An informal lawn area will cover the northeastern corner of the park with a pergola wrapping along the edge and an interactive water feature. This area will be raised higher in order to afford a better view down towards the Washington Channel and Potomac River beyond. Gardens will be planted near the 50-year old willow oaks that frame the northern and eastern border of the park. Play mounds will be provided near the informal lawn and curving paths created throughout the park. One of the "necessary" portions of the park is a pavilion, where some food and beverage service, as well as storage for park-related furnishings will be located. The pavilion will be designed to be less intrusive on the landscape, with the possibility of the pavilion being embedded in the hillside since the access road (another necessary portion of the park) will be at a lower grade than the informal lawn. Rain gardens will be interspersed throughout to help retain rainwater runoff before entering the channel. Tree plantings at the park will offer a variety of color as the seasons change. A total of 26 parking spaces have to be maintained for guests of the townhouses proposed at Pier 4 and the police and fire pier as well as a traffic circle that can be used for emergencies. Most of the land to the south of the traffic circle is owned by the National Park Service, but Hoffman-Madison Waterfront wants to work with NPS to rehabilitate the area leading down to the Titanic Memorial with lawn terraces and a rain garden.
The charrette members will meet again as the design process continues so the final result of the park will not be a surprise to the community. What do you think of the design draft?