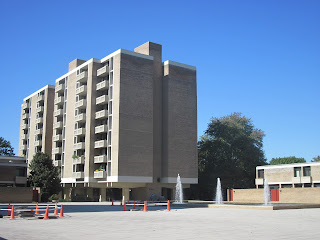 As Tiber Island Condos and Co-ops seek historic designation, the community is gearing up for a $2 million upgrade to its central plaza, which currently is a stark, windswept area with a large water feature. In addition to the plaza, the lobby, hallway corridors, and signage will be updated. Tiber Island has brought in SmithGroup/JJR to redesign the plaza and other common areas in a way that respects the period in which the community was built. 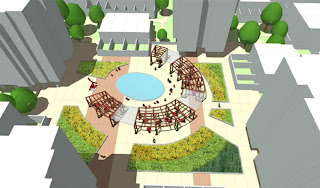 The SmithGroup/JJR design calls for the plaza to be shaped as an ellipse, with an elliptical fountain, structural pergola and vegetation. The new fountain will be smaller than the existing one and will serve as a focal point – an infinity fountain with adjustable bubblers that will be table height so it is accessible and touchable. Movable seating will be provided around the fountain and pergola, which will be a sculptural art piece with plants and vegetation. There will be three rings of vegetation behind the pergola, with groundcover, perennial plantings, and grasses of varying height. Direct walking paths will be created from each tower to the plaza and the pergola will be designed to be open both physically and visually. New ADA-compliant ramps will be installed to ease access from the towers to the plaza.
The plaza is still in the planning stage, so the finished product may look different than the above rendering.
Rendering courtesy of SmithGroup
Posted by SWill at 10:45 PM

Anyone know what they're doing on the roof of the building on M street? Is this part of the renovation?

They are putting in solar panels to power the property's water heaters. It is not part of the renovation.