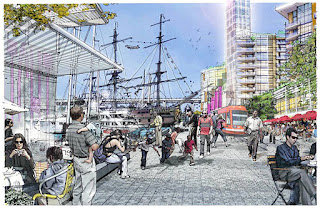 - Last week, the House Oversight and Government Reform Committee passed DC Delegate Eleanor Holmes Norton's bill to allow the development of the Southwest Waterfront as currently planned to proceed. H.R. 2297 clears up some legal issues regarding the transfer of the Southwest Waterfront that occurred between the Federal government and the District back in the 1960s which will allow the construction of piers that extend out to the Washington Channel. The bill will also ensure the Maine Lobsterman statue and Titanic Memorial will be maintained, although the Lobsterman statue may be moved to another area of The Wharf. An affirmative vote in the full House and Senate will allow the development to proceed. Rendering courtesy of Hoffman-Madison Waterfront 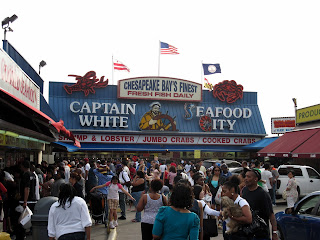 - DC's Office of Motion Picture and Television Development has designated the Maine Avenue Fish Market as the One City Location of the Month for the month of November. Back in March, the MPTD began the monthly designation to help bring attention to sights in the city that can be used as filming locations. The fish market was most recently featured in the film "State of Play". Arena Stage was designated back in April. 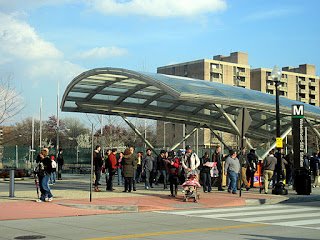 - WMATA decided in a meeting last week to make some changes to Metro station names ahead of a reworking of the Metrorail map needed to reflect service changes as well as the introduction of the Silver Line. In Southwest, the Waterfront-SEU station will revert back to its original name - Waterfront. Since Southeastern University is no longer in existence, that appendage has been dropped. A bid to add Arena Stage to the station name, which was supported by ANC 6D, was rejected by the Metro board. Also, a proposal to add National Mall to the Smithsonian Metro station name was rejected. The Navy Yard station in Near SE will become Navy Yard-Ballpark. These changes will be implemented in the fall of 2012.

- ANC 6D 01 Commissioner Bob Craycraft reports on his Facebook page that DDOT has pushed back the completion date of the road work on Maine Avenue near the fish market to the end of November. The road work was originally scheduled to be complete back in mid-October. Below is a description from DDOT about what is being done to the road:


The project will replace the existing 4-foot-wide sidewalk with a new 14-foot-wide trail, accommodating both bicyclists and pedestrians, and replace the existing road surface. Installation of new storm water drainage elements, bio-retention areas, trees, lighting, signs, curb, gutter and fencing is also included in the project. To accommodate these amenities, on-street parking in this area will be eliminated. The number of vehicular lanes will be reduced from two to one and some driveway entrances to businesses will be realigned.

Some of the new curbs have been put in place; doesn't feel like 14' wide, but I'll take what I can get.

I am going to petition the DC council to permanently shut down and raze the public housing developments in the area. They are nothing more than crime incubators, and stand in the way of positive development in the community. They did it over by Nats stadium. See the following story in WP: http://www.washingtonpost.com/local/four-people-robbed-in-similar-incidents-in-southwest-washington/2011/11/14/gIQAfGWgMN_allComments.html?ctab=all_&#comments

It's interesting that Eleanor Holmes Norton introduced legislation to ensure the protection of the Maine Lobsterman and the Titanic Memorials along the southwest waterfront, but not the Banneker Memorial. And if bill, H.R. 2297, were not enough, she has also introduced bill H.R. 1972, to give the National Capital Memorial Commission carte blanche authority to terminate any commemorative effort they deem unfit to raise the funds needed to successfully complete a memorial. It seems to be targeted to the Banneker Memorial wouldn't you say?

I find it interesting that she would introduce such legislation in light of the fact that only one world class memorial to an African-American is sited within the monumental core, or prime area, of the nation's capital; and the first one authorized 40 years ago to colonial American hero, Benjamin Banneker across from the southwest waterfront, she did not include for protection in bill H.R. 2297.

As a matter of fact, Eleanor Holmes Norton is doing all within her power to ensure that the Banneker Memorial, at the southern terminus of the L'Enfant Plaza corridor, is usurped and that the 15 year effort of the Washington Interdependence Council, which she politically exploits as being the memorial she authored the original legislation on in 1998, is not upgraded or survives the new $2 billion waterfront renovation, as her friends, the powerful developers et.al want to desecrate and usurp Banneker Overlook Park for their own designs, with the Congresswoman's blessings and assistance. It's the usual game of the haves trampling the have nots, as was the case in the 1960's when poor blacks were displaced to build L'Enfant Plaza in the first place. This pattern of gentrification's cold and callous war against the poor and disenfranchised marches on in the land of liberty and opportunity for the ruthless.