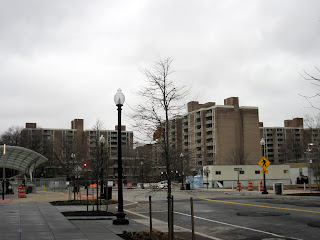 Housing Complex wrote a piece last week about historic districts in DC and pondered whether Southwest would be next on the list of neighborhoods to seek designation. Contrary to the HC piece, there are rumblings from within the neighborhood to create a historic district. Typically, buildings need to be at least 50 years old to be considered and there are already a few older properties in Southwest that are on the National Register of Historical Places. Those located south of the Southwest Freeway include Friendship Baptist Church, Thomas Law House, National War College, Randall Jr. High School, Syphax School, James C. Dent House, and the Titanic Memorial. However, the majority of buildings in Southwest are just now turning 50.
﻿
﻿﻿﻿
﻿﻿

Capitol Park Apartments at 800 4th Street (now Potomac Place Tower), designed by Chloethiel Woodard Smith and built in 1959, was the first residential tower built as a result of urban renewal and was designated by the DC Historic Preservation Review Board (HPRB) as historic in 2003 in an attempt by residents to block development of its parking lots and garden into apartments (eventually condos). The HUD headquarters at 7th & E Street just north of the freeway was more recently designated by the HPRB as well as the James C. Dent House (built in 1906). ANC 6D supported the designation of Tiber Island Coops and Condos on the south side of 4th & M Streets as historic at their July meeting (the Thomas Law House, which is a part of Tiber Island, has already been deemed historic). Besides the collection of mid-century modern architecture that dominates Southwest, there are other pockets of buildings pre-dating urban renewal that haven’t been designated, such as the row houses along the 1200-block of Half Street and Carrollsburg Place.
A historic district designation would bring more scrutiny to building additions or new construction within the proposed district. New buildings would most likely need to conform to the standards of structures within the district and it would be more difficult to demolish existing buildings. However, it may spur the restoration of buildings in the neighborhood that are starting to show their age and increase property values. Design adaptation is already happening, to an extent, with newer projects in the neighborhood. For example, the office buildings at Waterfront Station, designed by Shalom Baranes, use terra cotta on their façades, a material that has been used for the shade screens at Capitol Park apartments. In addition, the design of the new St. Matthew’s apartment building on M Street & Delaware Avenue, also designed by Baranes, uses building and landscape design elements from nearby residential buildings. These two building designs borrow from mid-century mod, but have been brought closer to the street and incorporates a mix of uses (in the case of Waterfront Station).
Should the Southwest Waterfront join the ranks of other DC neighborhoods, such as Capitol Hill, Dupont Circle, Shaw, and Georgetown and be designated as a historic district? Vote in the poll at the upper left corner of the page and/or leave a comment. Also, are there specific buildings in Southwest that deserve historic designation (#1 on my list would be Jefferson Middle School)?
Note: For those who are interested in learning more about modern architecture in Southwest, the DC Preservation League will be holding a neighborhood tour on October 22, starting at 10am. Register here.
Posted by SWill at 10:32 PM

Would preservation mean the usual changeover to the hideous brick sidewalks found elsewhere in the city or would the neighborhood keep the distinctive "deck plank" style concrete sidewalks which are currently out? And would this mean the Tiber Island/Carrollsburg pedestrian traps (in the form of 'sidewalks' made from uneven ballast stones) would also stick around?

I'm kind of torn on this. As the first urban renewal project in the country, it's historically important. But does the entire neighborhood need to be kept in it's current form forever? Do we need both Tiber Island and Carrollsburg (since they both look the same)? We've also learned things over the past 50 years, like that large concrete plazas (a la Tiber Island) don't work. We've learned that engagement with the street and mixed uses are a good thing (which is something that none of the modern buildings do).