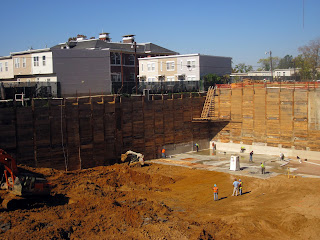 - Across the street from Nationals Park along South Capitol Street, there is a deep hole in the ground hidden behind a chain link fence. The hole will soon become a foundation for Camden South Capitol, the first new Southwest apartment building in decades. Camden Property Trust is developing the apartment building, which will have 276 units and is located at the northwest corner of South Capitol and O Streets. WDG is designing the project, with amenities including a rooftop pool and deck, as well as ground floor retail. Twelve of the units will be set aside as affordable housing. Leasing should begin around the middle of 2013.
- This year's Randall Neighbor Day at the Corcoran Gallery of Art will take place on December 10. On that day, all ANC 6D residents (those living in ZIP codes 20024 and 20003) can visit the Corcoran for free.  The annual event came about due to the community benefits package the ANC negotiated with the Corcoran in 2007 when they planned to redevelop Randall School at Half & I Street as a college and apartment complex. When the Telesis/Rubell team took over the project in 2010, the subsidy was maintained. In addition, once the new museum planned for Randall School opens, it will be free every day for ANC 6D residents. Special exhibitions at the Corcoran include 30 Americans, which showcases works by many of the most important African American artists of the last three decades. This exhibition is from the collection of Don and Mera Rubell. Other exhibitions include Hank Willis Thomas: Strange Fruit and Gordon Parks: Photographs from the Collection. The Corcoran will be open on December 10 from 10am - 5pm.
Posted by SWill at 9:10 AM