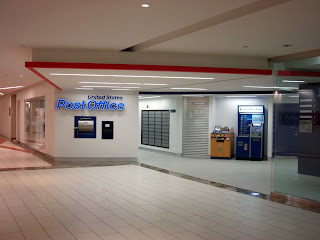 I took a tour of L'Enfant Plaza yesterday with some community leaders and Matt Ginivan from JBG. Over the summer, more retailers have been moving into the renovated retail center, which was designed by SmithGroup.  In the food court, Au Bon Pain has now been open for a couple of months and FYI (Frozen Yogurt Indulgence) opened within the last couple of weeks.  They join Potbelly and Roti, which opened in the spring. So far, the new retailers have been a resounding success, with double the amount of demand originally anticipated. The post office has also moved to a new location.  Coming Soon signs have been spotted for other retailers, including Starbucks, Moe's, Five Guys, Mamma Ilardo's, Gourmet Too, Gateway Newstands, Jay's Jewelers, Mina's Boutique, and Nash's Mens Wear. CVS, Hallmark, and McDonald's will be back in the new center as well.
The second phase began earlier this year and by March of 2012, according to Ginivan, passageways will be carved out of the western portion of the existing retail center so workers can still access the food court as demolition gets underway.  Around the same time, the 20-foot tall glass atrium will start construction.  The atrium will replace the glass pyramid (which replaced a water feature) and serve as the new entrance to the retail center, bringing in more natural light. Completion of the second phase of construction is slated for September 2013 and will result in 205,000 SF of retail. Meanwhile, a new extended-stay Homewood Suites by Hilton hotel is supposed to start construction on the northeast corner of the L'Enfant Plaza complex this winter. Eventually, new office buildings are planned for the plaza area and the southeast corner of the complex.

Some of the community leaders on the tour gave suggestions on the types of retail needed at L'Enfant Plaza to draw residents, including sit-down ethnic restaurants (such as Thai, sushi, Mexican, etc), a fitness center (since the one at the L'Enfant Plaza Hotel was closed to residents once it was renovated), small grocer/health food/organic, a sports bar, and a barber shop. A south entrance to L'Enfant Plaza and/or a pedestrian bridge on the south end was suggested to help connect the Southwest Waterfront neighborhood and L'Enfant Plaza. At the behest of ANC 6D Commissioner Craycraft, JBG will host a community meeting in November to go over details of the renovation and expansion of L'Enfant Plaza.  I'll let you know more details on the meeting once they are known.
Posted by SWill at 8:29 AM