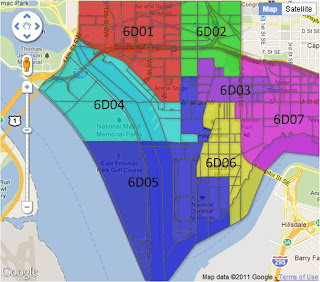 - At last week's ANC 6D meeting, a new ANC single-member district map was adopted by the commissioners, contrary to the map approved by the Ward 6 Redistricting Task Force. In the new map, 6D01 loses its portion of The Wharf to 6D04, while 6D05 gains the block bounded by M Street, I Street, 4th Street and 3rd Street (including the eastern portion of Waterfront Station and the Southwest Library). 6D06 remains largely unchanged - it gains a block currently covered by 6D03. However, the biggest changes come to 6D03, 6D02, and 6D07. 6D03 loses the large block mentioned previously to 6D05, gains more of Capitol Park from 6D02 and crosses South Capitol Street to cover portions of Near SE. 6D02 gains Potomac Place, while 6D07 gets a single block in Southwest, which happens to be the block where former ANC 6D03 commissioner Mary Williams lives. She made a plea to be moved out of 6D03 during one of the redistricting meetings in July. The Ward 6 Redistricting Task Force will vote on the proposed change to the map tomorrow.
- Also at last week's ANC meeting, the commissioners voted to recommend changing the name of the Waterfront-SEU Metro station to Waterfront-Arena Stage and alternatively SW Waterfront if the first name is rejected by WMATA due to the length of the name. A proposal to add Banneker Park to the L'Enfant Plaza Metro station did not come up for a vote due to the length of the proposed name. (via JDLand)
- "One month from today" is the latest news I received from the proprietor of Z-Burger on Sunday for when the restaurant would bring its burgers, shakes and malts to Waterfront Station. I saw some workers inside the restaurant earlier this week, so we'll see if it opens by mid-October next to Station 4. TD Bank has signed a lease to open a branch in the vacant space to the north of Station 4, but an opening date is unknown at this time.
Posted by SWill at 9:32 AM