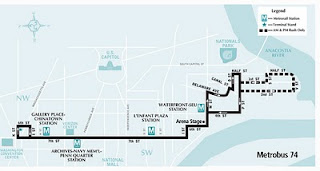 - Starting on September 25, WMATA will introduce a new bus route that will connect Southwest and Downtown. The new route will be called the "74 - Convention Center/Southwest Waterfront" and will run seven days a week from 5am to 1am. During peak periods, headways will be 18 minutes and 24 minutes during other times.  This fall, Next Bus real-time destination screens will be installed at eight bus shelters along the route. The route is shown on the above map. The dotted line portion of the route shows the extension of the line to Buzzard Point during weekday peak periods. This new route was made to replace the SW Waterfront-Convention Center Circulator route that will be discontinued at the end of this month and also replaces the 70-71 routes.
- The Near SE-SW Community Benefits Coodinating Council (CBCC) is conducting a survey of ANC 6D residents to find out what services they would use in a community center. The survey is available online and participants are entered into a drawing to win a $25 Safeway gift card. Surveys must be completed by September 30. On a CBCC-related note, there will be a reception on October 4 at the Capitol Skyline Hotel to discuss The Wharf developers' community benefit commitment to hire CBE's. for more information, check their website.
- The Mandarin Oriental Hotel was able to raise over $40,000 for the SW Playground Project last Sunday at their inaugural FANtastic March 10K walk/run. $10,000 of the funds was a corporate match from the Mandarin Oriental Hotel Group and the rest came from race participants, nearly 220 people.  Congratulations to race winners Miles Hilder and Sara Vuong, both Southwest residents.
- The SW Dog Park group is passing around an online petition to support bringing an off leash dog park to Southwest, the only quadrant in the city without a dog park. The group has been taking their dogs to Lansburg Park, but the gate at the tennis court is broken so it makes it difficult to enclose the area for dogs to run and play.
Posted by SWill at 12:17 AM

What's with maps that don't have north facing up? Seriously. At a first quick glance, I thought that bus was headed to Union Station.

why is the bus route sideways...I guess that's just how Metro does stuff. Secondly, it still is slightly useless and doesn't add much to the lines it is replacing. It goes north to an extent but not east or west. Maybe I'm wrong...

A dog park would be great for the neighborhood