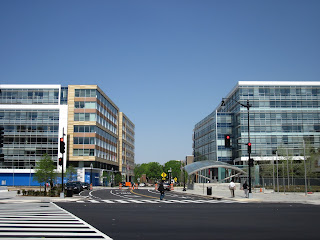 - DDOT has finally implemented promised changes to the intersection of 4th & M Street at the end of last week.  Left turns are no longer allowed from southbound 4th Street to eastbound M Street.  In addition, No U-Turn signs have been put up along M Street.  However, the Metrobus stop remains in front of the Bank of America trailer.  Has anyone noticed whether the timing at pedestrian crossings have been altered?
- ANC Commissioner Craycraft brings word that the sidewalk on the west side of 4th Street in front of the Consolidated Forensic Laboratory under construction between E & School Streets will be closed for two months starting on September 6 to rebuild a new sidewalk. In addition, four new oak trees will be planted where the current sidewalk is located and 15 trees will be planted on E Street and School Street. New streetlights will be installed with the Washington Globe fixtures seen near Arena Stage and Waterfront Station. Several bike racks will be installed - Capital Bikeshare will be opening a new station at the corner of 4th & E Street.
Posted by SWill at 8:54 AM

Yes, the pedestrian timing at 4th St and M St has been changed. Pedestrians crossing M St on the east (Metro/Safeway) side of 4th St have over 50 seconds to cross.

Thanks, Jim. I haven't had the chance to check out the signal timing yet.

Sorry, first time to this blog. I want to post a new subject but do not see how to do that.
My post is:
1.) Where is Lansburgh Park in SW? (I don't see it on the quite detailed satellite Google map)
2.) Could there be any correspondence between this blog and monthly "The Southwester"?

DavidG: 1.) Lansburgh Park is located on the east side of Delaware Avenue between K & L Street, behind MPD's first district HQ. 2.) I write a column each month in The Southwester.

I'm somewhat perplexed behind the rational for no left turn from 4th St,SW onto M St going east. There is a "DO NOT ENTER" sign on the south side of 4th & M Street,SW it's purpose is to prevent non-local traffic from driving down 4th St. when an event is held at the baseball stadium. All other times traffic can proceed down 4th Street. There is also a sign that prevents 5 ton trucks from going down 4th St which is a good thing. However, with the no left turn, more traffic will be using 4th St, where there is a "DO NOT ENTER" sign in effect during events at the stadium. You get my drift.

Since the No Left Turn sign went up, I've observed more drivers not adhering to it. With all the intersection in the city with No Left Turn signs, this No Left Turn sign seems to have some problems. Just like locating the Bus stop at 4th & M, to M St in front of Bank of America. It is my understanding the bus stop will be moving back to the original location.

In any event,maybe the left turn signal will be reinstituted at some point in time. From observations, cars, trucks and buses still make the left turn. I've even seen DOT vehicles making the left. Go figure...

Makes you wonder why people were so outraged when they made the changes last spring. Maybe a traffic engineer really HAD thought about all this, after all, huh? I personally liked the traffic set up before. Left turns are the bane of my existence and there's no reason why all the angry people from Fort McNair couldn't just pull a Michigan Left if they didn't want to wait one or two cycles of the light to turn L to westbound M street.

And that NO LEFT sign will continue to be ignored for as long as M Street contines to be one of the main roadywas into Southeast. Barring left hand turns from 4th is a dumb move to placate idiots. Seriously, who decides these things?

Maybe if the cops from the local station there actually knew about it, that would help. I have seen people turn onto there in front of cops, and they do nothing (why am I surprised by this?).

Does anyone know if they are ever going to tear down the public housing nearby? There has been a rash of crimes lately, surely coming out of those hangovers from the 60's...

Also I noticed that rocks have been placed on the steps of the bank of america trailer, to make it easier to rob people. They need to either remove that trailer or cover the rock piles nearby.

Removing the left-turn signal there allows the pedestrian crossing along the east side of 4th to get more signal time. People will eventually adapt to the "No Left Turn" signs -- people are being directed to turn onto I St instead.

This intersection sees more foot traffic than most intersections in town, given the Metro entrance and high local population density. Plus, it has an unbalanced auto traffic pattern; there are large traffic generators to its south and west (Ft. McNair and the I-395 entrance, respectively) but much less car traffic from the north (perhaps a legacy of the street not existing on that block until recently). So, it's a pretty unique setup.

Removing the left turn signal to allow the pedestrian crossing along the East side of 4th Street only works if the "No Left Turn" sign is "ENFORCED". Otherwise, as mentioned previously...cars, trucks, buses, DOT, METRO and USPS vehicles will continue to turn left, even though there is a flashing sign at I Street, instructing motorist traveling south on 4th Street, that one cannot make a left turn at the next intersection (M Street).

Over 30 minutes observation of the 4th & M Street intersection on 08.31.11 from 4:00 to 4:30 every 3 out of 5 vehicles made the left turn. I'm sure MPD is going to permanately place an officer at that intersection to prevent the "No Left Turn" (yeah right!). Unfortunately, only way that will happen for a brief period of time is for someone to get hit by a vehicle making the left turn or install a no left turn camera. I concur it is a pretty unique setup, that requires more traffic engineering or common sense.

Why is it hard to accept that pedestrian crossings AND left hand turn lights can coexist especially when its a timed arrow like it was before?

Ironically, I think the intersection is more dangerous now because before when there was a left turn signal it was timed separately from when pedestrians had the light. Now that people are turning left anyway, they are turning on the green light when pedestrians also have the light so we are all in the crosswalk at the same time.

At first I was glad to see they finally made a change because the north-bound left (from 4th onto M toward Maine) turning traffic was a complete hazard. Every single day I saw cars turning on the red left arrow and narrowly missing pedestrians because they didn't realize the green light wasn't meant for them. I thought they could've fixed that by simply repositioning the light -- people simply didn't realize what light they were supposed to be looking at.

The problem with the new pattern isn't that no one is enforcing the no-left-turn direction, IMO. It's that no one understands the new rule. I don't think it's the drivers' fault. Honestly, the people turning left/east onto M from 4th don't realize they aren't allowed to. The signals/signage is terrible. And there's no reason to think you wouldn't be able to turn onto a major thoroughfare unless there were very clear posted signs. I'd much rather people were allowed to turn onto M than force them into the residential neighborhood.

Seems like they could've fixed the original problem by simply positioning the signal better. They threw out the baby with the bath water and have solved nothing (and STILL need more obvious signs/lights).

Any new traffic configuration will require some time for people to get used to it. I remember sitting in an office next to a newly installed stop sign once and watching easily half the cars completely miss the stop -- but a month later, compliance was almost universal. Already, I've noticed that many more people are turning left from 4th onto eastbound Eye.

The new setup does substantially increase the available pedestrian crossing time, from less than 1/3 of each light cycle to about half. It always bothered me that left turns got such priority at this intersection -- in any given cycle, there might be a dozen pedestrians and 2-3 left turning cars, but both got the same amount of time at the intersection. Power to the people!

Sorry, not going to provide excuses for drivers who fail to pay attention to the road. It boils down to pure ignorance, inattention, or deliberate breaking of the law..."because it's what I've always done."

For people turning left onto M Street, there are two no-left-turn signs -- one by the traffic light, one (larger) right by the cross walk. PLUS, the paint on the ground shows that it's a "straight ahead only" lane.

If M street had posted brand new signs saying a speed limit of 45 you can be sure that people would have driven accordingly on the very next day. Anyone who misses ALL THREE no-left-turn signs should not be driving. Period.