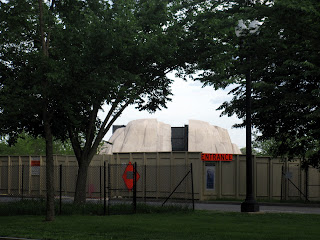 - On Wednesday, Mayor Gray announced a list of events leading up to the dedication ceremony of the Martin Luther King, Jr. National Memorial along the Tidal Basin. Most of the events will take place at the MLK Library downtown, but on Tuesday, August 23rd, DC residents will get to tour the memorial from 8am to 8pm - days before the official dedication. Timed tickets will be distributed to tour the memorial. Stay tuned for details on how to receive those tickets. The official dedication ceremony will take place on August 28th at 11am. Prior to the dedication, there will be a musical tribute to Dr. King from 10-11am and a concert from 2-4pm. All three events are free and open to the public. In addition, the Washington, DC Martin Luther King, Jr. National Memorial Project Foundation has a slew of other events planned leading up to the dedication.
- August 25 is the make-up date for the Nationals Neighborhood Game at Nationals Park, which was rescheduled due to a rain-out from April 16th. Locals will be singing the national anthem, throwing the first pitch, and saying "play ball!". There are some free tickets available, so contact your ANC 6D commissioner or SWNA representative for details.
- The Washington Post's food critic Tom Sietsema recently wrote a review of Station 4 and it wasn't a good one. Here is a snippet:

Precious little of that magic surfaced in a recent dinner at Station 4, which started with breadsticks flavored with dried black olives and continued with a riff on a peanut butter and jelly sandwich using almonds, tomato jelly, foie gras and brioche. (Imagine really sweet French toast with some meat in each bite.) [Orlando] Amaro's "San Francisco style" cioppino is something no Bay Area resident would recognize as the classic robust seafood stew. "At least the kitchen didn't overcook the seafood," said the optimist at the table.
A waiter talks up the octopus, and we follow his lead. The herb-marinated, char-grilled seafood with potato confit cooked in duck fat and a trail of smoked paprika mayonnaise is the best thing we eat all night.
Station 4's pizza may be the worst. The pie is so without charm, we leave all but two slices behind.
Come to think of it, the previously frozen french fries, supposedly cooked in duck fat but revealing no such sign, are mediocre, too. Pappardelle with short ribs, thick and heavy, ignore the reality show outside, where the thermometer is pushing triple digits. A side dish of Brussels sprouts (hey, chef, it's summer!) is overcooked.

Meanwhile, it seems Metromix went to a completely different restaurant.  Here is some of what they had to say about Station 4:


When handpicking the chef for his new modern American restaurant Station 4, owner Med Lahlou decided go for a more nuevo route than new. And the results have been spectacular. Famed Venezuelan chef Orlando Amaro—whose Blue Moon has been named one of Miami’s top restaurants—has added his own flair in his signature dishes.

The restaurant’s location is a few blocks from the Southwest Waterfront (and across the street from the Metro station of the same name), and as you’d imagine seafood plays a key role in the menu. Amaro’s charred octopus is an excellent choice from sea, with potato confit, smoked paprika aioli and tomato-feta tartar. The combination makes for a succulent and crispy texture to the octopus.

Other excellent seafood options at the restaurant are the San Francisco-style cioppino—made with fresh crab, shrimp, mussels, clams and calamari in a saffron-tomato broth and served with a toasted baguette—as well as the sautéed calamari served with lemon-oil tapenade and squid ink vinaigrette.

There's only one way to find out which of these reviews is more correct...go check it out for yourself!
-  It was reported last week in the Washington Business Journal that 950 L'Enfant Plaza was put on the market by Heyman Properties. The office building is the south building at the plaza and is one of the buildings not owned by JBG (the other is the USPS headquarters), which is in the midst of renovating the retail center and plans to build a hotel, office, and maybe apartments.
Posted by SWill at 12:23 AM

I think Station 4 is awesome, and their pizza is great. So much for the WP food critic!

Fine, you spend your money there for far too expensive prices not reflected in the results or the presentation. Mr. Lahlou failed in sharing his menu with his prime target (the neighborhood) prior to his opening. Unless he truly feels Arena Stage is his target or he mistakenly believes Station 4 will make a destination restaurant, his new venture is a fail. I've been twice. I was hoping for a pub, like his other establishments. You can put a white tablecloth on a pig and it's still a pig.

while I did not attend Mayor Gray's event pertaining DC's events in connection with the MLK Memorial Dedication I'm almost certain that most of the events that you are referring to will take place at Walter E Johnson CONVENTION CENTER.

Here is a link from the MLK Memorial site at http://www.dedicatethedream.org/site/c.4nJHJQPoEiKWE/b.6626063/k.3544/Exhibitors.htm

Happy Hour prices on the Station 4 pizza and the burger are good. Beer and wine are discounted then, too. Really, the only thing that bugs me is that they took the bacon out of a few brunch entrees and kept the price the same. That just seemed cheap and in poor form and a huge turn-off. The waiters are good, though, and the atmosphere is pretty nice most days. One of the bartenders lives in SW as well.