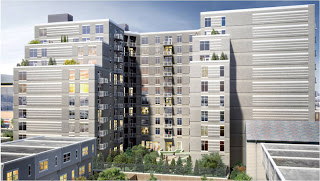 - In the latest FRONT Page News e-newsletter from the Capitol Riverfront BID, the Camden South Capitol apartment project is featured - the first rental apartment building to start construction in SW in decades. The 276-unit apartment building is under construction at the northeast corner of South Capitol and O Street. Although the building is technically outside the borders of the BID, the Capitol Riverfront is keeping tabs on the project. A website has been set up for the project and includes information on in-unit features such as:Energy Star stainless steel appliances, electric oven ranges with ceramic glass cook tops, solar shades, 42" upper cabinets, double vanities in select units, garden soaking tubs, and stand-up showers in select units. Community features will include a rooftop pool with BBQ grills and outdoor fire pit, cyber cafe, and a resident gaming lounge with kitchen. Camden South Capitol is being developed by Camden Property Trust and designed by WDG Architecture. The building is scheduled to deliver in the summer of 2013.
Rendering of the rear of Camden South Capitol courtesy of WDG Architecture
- At Monday's special ANC 6D meeting on The Wharf PUD, the commissioners voted unanimously to support the Stage 1 PUD application after several amendments were approved.  Back in July, the ANC gave conditional support to the PUD but had 27 concerns that needed to be addressed by the Hoffman Madison Waterfront team before the commissioners could give their full support. Since that meeting, HMW has been in discussions with the ANC and most of the concerns have been addressed. Here is a link to the responses to the ANC's concerns by HMW.
Thanks to Jason Kopp for covering the meeting via Twitter!
- Mayor Gray and other dignitaries were on hand Thursday morning to help unveil MLK Drive at Maine Avenue and 14th Street, a symbolic renaming of sections of road in the District linking Martin Luther King Jr. Avenue east of the Anacostia to the new MLK Memorial along the Tidal Basin. The dedication ceremony for the memorial was scheduled for Sunday, but has been postponed until September or October due to Hurricane Irene.
Posted by SWill at 1:22 AM