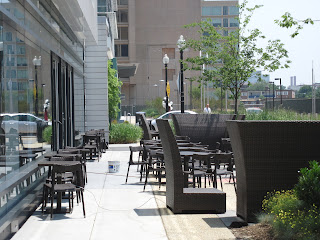 If you walked down to Station 4 yesterday hoping to have a drink or grab a bite to eat, you may have been disappointed since the highly anticipated restaurant has not opened yet.  However, the restaurant received its Certificate of Occupancy earlier this week, so the opening must be imminent! The menu is still being tweaked, so it is not available yet. Below are the hours of operation and meal times:

As I mentioned last week, Z-Burger is between 2 and 3 months away from opening in their space next to Station 4. Expensive upgrades to the space have caused delays. 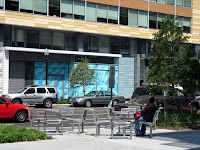 At Monday's ANC 6D meeting, Gordon Fraley from Waterfront Associates told the commissioners that the existing retailers at Waterfront Station have been doing well since opening up shop in 2010. Also, he mentioned that CVS has plans to make some upgrades to their space, including the addition of self-checkout lanes. It was confirmed that TD Bank will open a branch at Waterfront Station just to the north of Station 4. TD Bank has been expanding in the DC metro area and most of their branches are open 7 days a week. No timetable for when the bank will open is available. That leaves three retail spaces left to lease - the green-framed space at 1100 4th Street and two spots at 1101 4th Street next to Subway. The landlord is in discussions with a potential tenant at the 1100 4th Street space. I was told several months ago that an AT&T Wireless store was coming, but I haven't heard any more about it since.
Posted by SWill at 12:01 AM

"The green-framed space at 1100 4th Street" needs to be a frozen yogurt place! That place screams out for it just based on how it looks. I suppose SweetGreen would logically be the brand that most makes sense there, but any brand would do well, especially since we have a young neighborhood and that is the demographic for frozen yogurt shops.

While I wouldn't protest Pitango Gelato showing up there (and it'd work because their logo is also green), I don't think they'd be inclined to cross the Mall to the netherworld that is "downtown Southwest." But, I can hope!

Just, please, NOT an AT&T retail store. That is useful to only about a third of the population, and only once every two years at that. That belong in a busy area, not a small neighborhood strip of stores.

Curious if anyone agrees with me that the green-framed place would make a great frozen yogurt shop location?

Glad to hear Station 4 will be open late. Now you can get something to eat there after 11. Hopefully the other locations will follow suit (particularly that Subway seems to close down whenever it feels like it).

I think a frozen yogurt place would be great, I'm just wondering if we have enough foot traffic to make it viable. Hopefully we will once Z-Burger and Station 4 open up.

I agree that an AT&T store would be a snoozer, but I guess it's better than nothing?

Not sure about that idea...I think a froyo place is a niche market. Yeah, kids would like it, but it's got just enough of a hint of snootiness that I don't think befits SW. Plus, what would happen the 6 months out of the year when people don't really appreciate frozen foods?

I'm also disappointed at the choice of an AT&T store too, but I get why it makes business sense. DC Gov buildings are there and provide a lot of good clientele. Work phones boost a lot of cell carriers' profits.

As far as occupying the green space: I'm really all for health foods, but I think the most successful thing there would be a greasy spoon kind of food joint. Some place like Bob & Ediths. Popular cheap fare, good for brunch, good for late night eats, and no alcohol served. Unfortunate for the healthiness aspect, but I think totally worth it on the economic/social end. A locally run place like that (i.e., not Denny's or IHOP) would certainly bring some real character that *fits* SW. Maybe they could also sell frozen treats there too...hmm...

Very eager to try out Station 4. Hope the food is good.

Agree with PostiIt that a froyo place is a niche market and SW may not be it right now. As a solution, a combo of froyo and ice cream would be great! That way it satisfies all target groups. I mean, what is a waterfront area without an ice-cream place?!

What about a Maggie Moo's-type of place?

I really think a nail salon would do well in one of the spaces. It would get government workers during the day and SW residents at all other times. Just my two cents.

Love the idea of froyo/ice cream, too. True about it being a seasonal market, but I think people still get frozen treats year round... and if they had cookies and other baked items too that would be even better. I've never seen this place in the DC/VA/MD area but a "One Hot Cookie & Creamery" would be awesome!

The most of my retail dollars still leaving SW are for hardware stores. If we could have one of those great Ace Hardware stores like on Logan Square or 4th & Mass NW, or even a branch of Frager's, I would spend more money in SW. Radio Shack would be nice, if it were a quality one. A kitchen place, like Hill's Kitchen, might find a market in SW with all the new condo's and apartments on the way. Pet supplies, like Chateau Animeaux?

I would totally be up for a Baskin & Robbins/Dunkin Donut shop. Of course I would have to hit the gym more often, i.e., more than once a year.

I would love to see a FroZenYo, it seems like they are popping up all over the place and loved by all!

Both me and my husband agree with Mr. Craycraft about bringing in an Ace Hardware store. We frequent their location on 5th street NW near Busboys & Poets.

I like the Ace/Frager's idea as well. Almost anything would be better than an AT&T store...

The hardware store is a *great* idea.

I'm really surprised that Lowe's or Home Depot haven't tried to come up with "express" stores for high-density areas. I know they'd be really popular...

Plus, the DC Gov building/permitting office (or whatever it's called) is located there in Waterfront Station. With so many builders frequenting the area, it's just one more reason why that is a great choice.

Another branch of Teaism, http://teaism.com/ would be lovely.

I asked one of the guys at the Ace Hardware about opening up in SW and he said it was too expensive. Which I guess they looked into it. But it's too bad because a hardware store would be perfect.

I was hoping for a good hangout spot like Tunnicliff's but if we are going to have a fast food place, I would want a Chipotle.

Any idea how we can get a farmer's market (on weekends) started in the area?

YES to a hardware store.
Or a low-cost haircut place like Hair Cuttery (it could do nails too!)

how about a vigilante supply store?