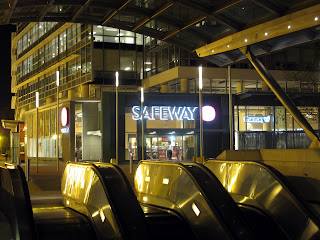 It was reported in Metro Weekly earlier today that a gay couple were victims of the repeated use of an anti-gay slur by a Safeway employee while at the checkout counter at the Waterfront Station Safeway last Saturday. From the article:

''We put our groceries up on the conveyor belt, some frozen dinner and wine, and [the cashier] said, 'Oh God, they're faggots,''' says Morgan. ''And then Brendan said, 'I'm sorry I didn't hear what you said.' And she said 'You guys are fucking faggots.'''

When the couple asked the cashier for her name, they were told it was ''D'Angela.'' Morgan adds that she did not show any remorse for her comments.

''We just couldn't believe it,'' he says. ''She didn't seem apologetic or anything. We asked her for the store manager and she just ignored us. So we ended up leaving our groceries where they were and we walked [away].''

The couple has filed a complaint with the D.C. Office of Human Rights. After the story was posted, the reaction on Twitter was universal - the conduct of the employee was unacceptable and an explanation was needed by Safeway. Others have gone further and suggested there should be a protest of the store. A protest of the most profitable Safeway in the city could send the message that this kind of unprofessional behavior can not be tolerated.  As of today, the Safeway employee still works at the store, evidenced by a follow-up to the Metro Weekly story where another Southwest resident went to the store today and videotaped an apology from the employee. Below is the video that was posted on YouTube.

Update: An official reponse from Safeway regarding the incident was posted on Ward 6 Council member Tommy Wells' blog:

"We extend our sincerest apologies to Mr. Morgan and Mr. Harrington for the completely unacceptable comments by our employee. Safeway employs and serves people from all backgrounds, and absolutely does not condone discrimination or intolerance of any kind by any staff member. The company is reviewing the matter and will take appropriate corrective action."

Update #2: CM Wells' blog brings news that the Safeway employee has been terminated and another apology has been given, this time by Eastern Division President Steven Neibergall:

We were shocked and appalled to learn of the statements made to two of our valued customers by one of our employees. This incident is personally offensive to me and to the rest of the men and women who proudly represent us in our stores. This goes against everything we believe and practice in terms of serving and welcoming our customers, and in being a part of the diverse communities we are privileged to serve. We are at a loss to explain how one of our employees, even one who has been on the job for less than a month, could consider this kind of behavior to be acceptable. The employee has been terminated.

Besides investigating the incident itself, we also are looking into the unsatisfactory response our customers received when they attempted to bring this to the attention of local store management. The complaint should have been dealt with immediately and we apologize that this was not the case.

We have reached out to the customers involved to extend our sincere apology. We are truly sorry this happened in our store and are taking decisive and urgent action to ensure it does not happen again to any customer in any of the communities we serve. No one should face what these customers faced, and we are humbly sorry it happened to them in our store.

She should have been fired already, or at least put on leave pending an investigation. Safeway had better issue an official apology and send their employees to sensitivity training, lest their most profitable store lose a lot of customers...

Thanks for covering this. Safeway's reaction has been appalling. I don't want free samples of NY Strip and an occasional free bag if people can be called horrid names amid obscenities by employees with impunity. This is not what a community partnership is all about. This is a business which might begin to be wearing out its welcome.

This is despicable. I can't believe this level of backward hatred still exists in a cosmopolitan city. And I think I noticed her nose getting three inches longer during that cross-armed apology...can it really be honest if someone ambushes you with a camera?

Honestly, this never had to be a stain on Safeway if they had reacted quickly enough. But the longer Safeway waits to take action on this, the more serious their action must be. If they had reacted immediately, they could have gotten away with sensitivity training for the employee and Safeway could have looked really responsible. Taking this long, a firing is in order and they have a bit of mud on their face. If they wait another week, they had better fire her and start contributing money to pro-LGBT non-profit groups begging for apology from the local gay community.

Safeway, you're on notice...and not just from members of the gay community.

A pretty simple incident to "review" and "take appropriate corrective action"
I don't think that it would take 5 days to do.

Outrageous. And yeah, I don't believe that "apology" for a second. Its obvious she's not sorry at all. She should she be fired. And the fact that management isn't taking it seriously enough is just as outrageous. We'll be shopping at Harris Teeter, Whole Foods or anywhere but Safeway.

It is about 2pm on Thursday and Tom Sherwood is interviewing Mr. Muckle for the local NBC affiliate. I had the opportunity to talk to both Tom and Mr. Muckle. I understand that Tom has also interviewed Andy Litsky, who is promising a boycott and picketing tomorrow if appropriate action isn't taken. Muckle indicated to me that the employee is no working at the store today -- unclear if that means she won't be back. My view is that the "appropriate" action that Safeway promises must be appropriate to the community as well as to Safeway. This is no longer just a decision for Safeway. The community must know and agree with the outcome.

Let's change around the scenario:

Some white cashier calls a guy waiting in line a nigger. Do you think it would be handled as sloppily as this is being handled?

^ I imagine that street justice would be quick and decisive.

Doubt safeway would act any more or less indifferently though.

Bishop Charles DD
This is unacceptable behavior by any American, by any employee, let alone Safeway. What a disgrace for the Nation's Capitol. What shameful treatment of God's people.This is the same store that checks us out at the door because a few steal from them. So we should have our purchases checked?
I love DC. Wouldn't live here if I didn't, but sadly, more and more, the District is a center for antigay activity, and is a hub for reverse discrimination. Ah, these christians, how they love one another.

The employee has been terminated.

Of those who comented how many have met her?
I mean I only know her as a cashier but it does not fit, so why believe these people?
no employee should be terminated just because a customer said something

Why believe "these people"? Because she didn't deny it. In her fake apology, she acknowledged it happened.

If she were smarter (for her own sake), she would have pretended like it never happened and your argument could have some merit. But then again, bigots aren't typically very smart to begin with, are they?

I can't believe people are actually shocked by this. The city insists that Safeway hire only from the local (read: "depressed") neighborhoods nearby, and of course they bring in ignorant, bigoted, and socially inept people and expect them to act civilized.

A perfect example of this is the areas where they had fences up to plant grass. The "locals" tore down the fence, created their own pathway, and scrawled gang tags all over the wall there... but we expect them to behave differently at work?

I saw this coming. Any excuse to use the "n" word. But only through the anonymity of the internet.

The community outrage and media coverage is a welcome contrast to two years ago October when Mark Blank was beaten to death at 6th and M Streets carrying his groceries home from Safeway about 9:30pm. Maybe we have finally turned the corner and said "ENOUGH." Thanks, Commissioner Litsky, for leading the ANC efforts on this.

When you move into someone else's neighborhood the way that these two transplants did, you need to accept the fact that their culture and norms may not be yours. Welcome to the 'hood guys. Now get on back to the suburbs if you don't like the fact that the actual residents of the city have a different opinion of your lifestyle choice than you're used to.

Murphy's Law: I'll bite. The Safeway employee (or anyone who deals with customers) doesn't have to accept the lifestyle of the customers they serve in order to do their job; however, the employee must treat ALL their customers with respect. It's called customer service, no matter if you're in the 'hood or in the 'burbs.

Examples of a "lifestyle choice":
Bike to work/drive to work, paper/plastic, eating out/eating in, coffee/tea.

Examples of something other than a "lifestyle choice," a.k.a. what we base our hate crimes legislation on:
Race, ethnicity, religious affiliation, disability, age, and sexual orientation.

The "D" is short for Dumb. So in her defense, I'd be angry at too if I had to spell my name with an apostrophe.