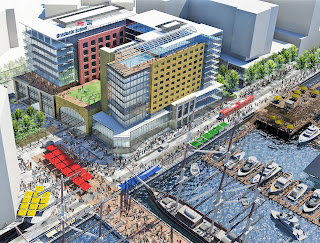 Over 300 people attended the community workshop tonight at the Mandarin Oriental Hotel organized by SWNA and ANC 6D to discuss the Planned Unit Development (PUD) for The Wharf (check out my Southwest Waterfront Redevelopment page for more information about plans for The Wharf). After some opening remarks by representatives from SWNA, the ANC, the District government, and the Hoffman-Madison Waterfront team, the meeting was split into five different rooms, each discussing one of the following themes:
I stayed in the main ballroom for the Design & Public Realm discussion, so most of what I'm writing about has to do with that topic.  At the end of the meeting, however, the group reconvened and major concerns from all five themes were shared with the audience, which are listed later in this post.  In addition, discussion of the first three themes listed above were videotaped and will soon be available on the ANC's website.

Stan Eckstut from EE&K Architects gave an overview of the master plan for The Wharf.  In his remarks, Eckstut mentioned that the design of the Southwest Waterfront is not an interpretation of other cities' waterfronts, but is uniquely Washington. It will be a pedestrian-friendly waterfront with vehicular access on the new Wharf Street; however, the presence of cars is just for convenience purposes and the street will not serve as a through route.
All of the parking for the development will be located below-grade, which is unique for waterfront developments and all of the buildings are designed to not cast a shadow on the water's edge. The blocks at The Wharf are designed to be 250 feet long compared to the typical length of building blocks along other corridors of the city such as K Street, NW, which is 600 feet. About 55% of the site is planned as open space and these public spaces are the focal points of the development. Eckstut also noted that the buildings were designed so there is no back side to the buildings along Maine Avenue.
About half of the buildings will rise to 130 feet (I counted 11), but will be stepped and angled to reduce the appearance of a wall of buildings along Maine Avenue. The average height of the other buildings will be 60-70 feet. Both residential and commercial buildings will have ground floor retail with a height of 20 feet; the residential buildings will be 10 feet per floor above the base level and commercial buildings will be 12 feet per floor. So, for a building 130 feet high, that translates to a 12-story residential building or a 10-story office building.
According to zoning, an additional 18-foot mechanical penthouse is allowed on up to 33% of the surface area on top of the 130-foot buildings for a total of 148 feet. The taller buildings are concentrated in the middle of the development with shorter buildings closer to Arena Stage and the fish market. Examples of building heights in other areas of The Wharf include:
Below are the major concerns brought by each of the five groups at the end of the meeting:
Design & Public Realm
Traffic & Transportation
Maritime Plan
Sustainability & Environment
Retail & Amenities
- parking
- affordability
- jobs
- opening a business
A word about retail - Monty Hoffman from PN Hoffman mentioned that they are hoping to bring back Jenny's Asian Fusion, Cantina Marina, and a smaller version of Phillips to The Wharf once the redevelopment is complete. Channel Inn will not be coming back.  There will be a mix of white table cloth and less expensive restaurants and cafes. No restaurant tenants have been announced, but the next anticipated announcement is a hotel anchor (HMW hired a consultant a couple months ago to help them decide on an operator for their planned four-star hotel).
The next steps in the Phase 1 PUD process is a revised preliminary PUD will be available on June 28 at the Southwest library.  Then, the ANC will vote on the PUD at their July 11 meeting and the Zoning Commission meeting will take place on July 18. Interestingly enough, the paper closure of Water Street is now in effect as of Tuesday, but the street will remain open until December 2012 when phased closures will begin. Another meeting is planned by HMW soon to discuss just the residential aspect of the development - affordable and market-rate housing. I'll let you know the meeting details once those are available.
Renderings courtesy of Hoffman-Madison Waterfront
Posted by SWill at 1:14 AM

Our blog moderator forgot to mention that the biggest round of applause all night was when he was introduced by Commissioner Litsky and thanked for maintaining this fantastic commuity resource---all of it his own volunteer time and expense. Thank you, Will.

Thanks, Commissioners Craycraft and Litsky. I don't think I've received that kind of applause since I was on Wheel of Fortune ten years ago!

So exactly whose views would be obstructed by the development on Pier 4?

That was kind of my thought. I wasn't in that breakout session but I caught the tail end of it. There seemed to be a lot of concern for some 45 foot buildings for a development that will feature buildings nearly triple that height.

Thank you for this recap! I'm really interested in the housing meeting coming up, as someone who wants to buy in the area in the next couple years and is worried I'll never be able to afford the leap from renting.

Also, wait, Will, you were on Wheel of Fortune? I didn't know that (I was on Jeopardy, so we've been in the same studio!)

I'm all for a lot of this development. It seems crazy the area has been so underused and undervalued. But it would also be crazy if the development is done at the expense of many of the longtime residents of Southwest, and a shame if it ruins some of the neighborhoods greatest characteristics.

I actually hope they don't bring back Jenny's Asian Fusion or Cantina Marina. Both are very overpriced and have extremely low quality food and service.

There is nothing appealing about either except the fact that they are on the waterfront. It's pretty obvious that the developers have either never eaten there, or have no taste.

I hope we can get some decent places like Busboys and Poets or their equivalent.

What about safety concerns? I was present for all the excitement over the building of Baltimore Harbor and Penn Quarter, only to see both areas subsequently plagued by problems with youth gangs. This is a serious issue in the real world for residents in both areas. Is there any reason to believe this project will be any different or is that simply the price we pay for being in an urban environment?

Pier 4 construction has disturbed some officers of Harbour Square Owners, Inc. Some of them own units that face Pier 4 and they are worried about their views and the resale value of their units in this coop.