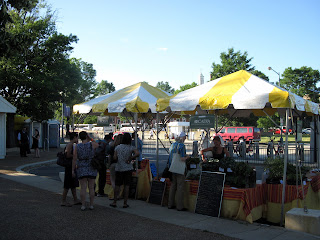 A large crowd descended upon the Southwest Waterfront on a low-humidity evening yesterday for the debut of the farmers market at 7th Street Landing. This was the kick-off to summer programming at the park, which will be activated Thursdays through Saturdays. Interim uses of the Southwest Waterfront over the next two years will include 7th Street Landing and Kastles Stadium at The Wharf, which will host its first match of the Washington Kastles tennis team on July 5. June's schedule of events for 7th Street Landing can be found here.  The farmers market will be held at 7th Street Landing every Thursday evening from 5-8pm until the end of September. There was a mix of produce from Arcadia Green Market, baked goods from Buzz Bakery, charcuterie hot dogs from Frank at Red Apron Butcher & Larder, beer and wine from the folks at ChurchKey and Birch & Barley, an Asian food station, King Rib BBQ, table tennis, and jazz music from Antonio Parker Quintet. Patrons that wanted to drink wine or beer at the park needed to have a wrist band and the entrances to 7th Street Landing were secured to ensure people didn't leave the area with their libations. ﻿﻿﻿Below are some photos from the market.
﻿
﻿﻿
﻿﻿ ﻿﻿
﻿﻿﻿﻿ ﻿﻿﻿
﻿
﻿ ﻿﻿﻿

Thanks, Will, for this great recap and the nice photos. Thanks, also, to Hoffman-Madison Waterfront, the Washington Waterfront Association, the Gangplank Slipholders Association, and many others for months of planning to make this event come off so smoothly.