Kastles Stadium at The Wharf Ready for its Close-Up 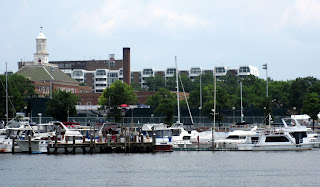 It took a little over a month for the new Washington Kastles stadium at The Wharf to rise along the Southwest Waterfront and is just about ready for the first Kastles match on July 5 against the Kansas City Explorers. After three seasons playing in a stadium downtown, the tennis team has moved to Southwest and will be a component of The Wharf. Meanwhile, the new tennis venue hosted the 4th annual Street Soccer USA US Cup where 200 players from 20 teams gathered to play from June 10-12 to benefit the homeless.
On Tuesday, tennis legend Billie Jean King joined Mayor Gray to inaugurate the stadium.  Due to the stadium's location mere steps away from the Washington Channel (see photo at the top of the post), there will be limited boat parking available for season ticket holders at the Gangplank Marina - the first tennis venue in the country to offer such a luxury. Here is a quote from Ms. King about the tennis facility from a Washington Post article:

“I think about it as a player, and I just hope it doesn’t get too windy,” said King as she gazed at Kastles Stadium at the Wharf, which sits along the docks of the Washington Channel near the corner of Maine Avenue and Ninth Street. “But it just looks more beautiful and it’ll keep it cooler for the fans during the summer time. For Washington, it’s unbelievable."

In the article, Hoffman-Madison Waterfront lead developer Monty Hoffman says the stadium will stay at its current location for the next two years and then will move further east near the Channel Inn as development gets underway at The Wharf.
Take a look at Washingtonian Magazine for some sneak peek photos of the interior. In that article, it states that the stadium will host a charity soccer event on July 31 called Celebrity Soccer Challenge 2011 hosted by Mia Hamm and Nomar Garciaparra.
Posted by SWill at 9:47 AM

Kind of ironic that there's this post about BJK right above the one about gay slurs at Safeway.

Glad to see no one yelled bigoted expletives at her. (rolls eyes)